HANOI (Vietnam News/ANN): Fifteen researchers from Vietnam's National Institute of Hygiene and Epidemiology and Japan’s Nagasaki University have successfully produced antigens to develop quick test kits for SARS-CoV-2, the cause for Covid-19.

If the ELISA test kits are certificated by Vietnam's Health Ministry and permitted for mass production, Vietnam would be able to stop importing kits from South Korea.

Antigens are a substance that promote the production of antibodies in the body.

According to the World Health Organisation, the Enzyme-Linked Immunosorbent Assays (ELISAs) are the most widely used type of assay. They have evolved from viral lysate tests to tests containing recombinant protein and synthetic peptide antigens.

Head of the institute Dang Duc Anh said the development of the test kits started as soon as the institute’s researchers has cultivated and isolated the new strain of coronavirus in early February.

At that time, Vietnam was one of the first four countries in the world to have isolated the new strain.

At present, there are only two testing methods for SARS-CoV-2: the real-time PCR and the rapid test for SARS-CoV-2 diagnosis which provides qualitative detection of IgG and/or IgM from human serum, Duc Anh said,

“An advantage of the rapid test is the fast results, but they can be inaccurate, ” Duc Anh said, adding that his institute’s researchers aim was to find a testing method that could produce both quick and exact results.

The rapid ELISA test could test multiple blood samples at the same time, he said.

According to the National Steering Committee for Covid-19 Prevention and Control, the ELISA test could make use of the ELISA testing machines that were already available at hospitals across the country from central level to district level.

The ELISA tests are also used to diagnose HIV, dengue and other diseases.

According to the Ministry of Health, Vietnam had become the fifth country in the world to successfully produce an antibody test for the new coronavirus.

They also cost only US$5, much cheaper than imported kits.

The Health and Life newspaper reported on Tuesday that the Health Ministry was certificating the test kits to allow massive production.

The new test would mean the country could ensure the medicine used for Covid-19 treatment regimens, face masks, protective suits and ventilators, as well as methods for testing, screening and detecting Covid-19 patients, the newspaper reported. - Vietnam News/Asia News Network 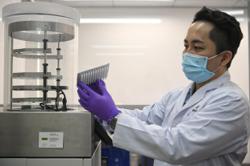