Clothes retailer Esprit to close 56 stores in Asia outside China

SINGAPORE (The Straits Times/ANN): Fashion chain Esprit Holdings is closing all 56 of its stores in Asia outside mainland China, including about 12 in Singapore.

The firm told the Hong Kong Exchange on Monday (April 27) that the shops in Singapore, Malaysia, Taiwan, Hong Kong and Macau will be shut possibly by June 30 as it tries to meet the challenges posed by the coronavirus pandemic.

Its outlets here - including in the Jem, Ion Orchard and Paragon malls - sell clothes for men, women and children, ranging from office wear to casual outfits.

The 56 stores to close for good had generated revenue of HK$267 million (S$49 million) for the nine months to March 31 - around 4 per cent of total group turnover.

Itestimates that the store closures will incur one-off costs, including impairment of assets and inventories and staff severance, of HK$150 million to HK$200 million.

The company, which is based in Hong Kong and Germany, will continue its joint venture business in China, its wholesale and licence operations in Asia and focus on its core markets in Europe.

Esprit said in the exchange filing that government measures amid the pandemic have forced the temporary closure of many of its retail outlets.

"The pandemic and the lockdown have adversely affected the consumer sentiment sales performance across all distribution channels," it added.

The company is negotiating with landlords to seek rental relief for the stores that will remain open.

Other high-profile retail collapses during the outbreak include British fashion brands Oasis and Cath Kidston. - The Straits Times/Asia News Network 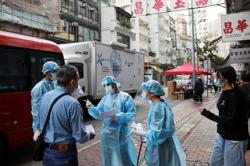