TOKYO, April 17 (The Straits Times/ANN) - "Made In China" Japanese goods may be the latest casualty of the coronavirus pandemic as Prime Minister Shinzo Abe resolves to wean firms off their dependence on China.

To help them do it, Mr Abe has earmarked about 240 billion yen (S$3.2 billion) to support domestic companies in decoupling their supply chains from China, especially those in high value-added manufacturing.

The strategy among businesses has long been China-Plus-One," said Dr Takashi Suzuki, an expert on Sino-Japan ties at the Aichi Prefectural University on Thursday (April 16), referring to how some businesses cover their baseline by supplementing a non-China location.

"But in the medium to long term, there will likely be a shift to 'Plus China'," he added, as companies reduce risks by putting fewer eggs in the Chinese basket.

While the shift has been underway since the height of the trade war between the United States and China last year, Covid-19 may hasten the process.

The first cluster of Covid-19 infections had occurred at a wholesale market in Wuhan, triggering a lockdown of the city and closure of factories across China.

Mr Abe has privately likened the fight against Covid-19 to World War III, wrote political journalist Soichiro Tahara on his blog this week, noting the state of emergency declaration in Japan last week had marked a "change from a 'peacetime' to a 'wartime' mindset".

The plan to support businesses diversify from China, which is part of Japan's 108 trillion yen stimulus package, urges "the return to domestic production any products or materials that are highly dependent on a single country".

Small and medium-sized enterprises can get subsidies to cover two-thirds of the cost while large companies can have half the cost reimbursed. More support will be given to companies producing medical supplies in dire shortage. 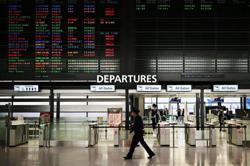 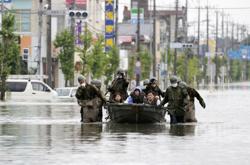