China says its Covid-19 peak is over

BEIJING (Xinhua): China on Thursday said the peak of the current outbreak of novel coronavirus disease (Covid-19) in the country is over, hours after the World Health Organization (WHO) declared the epidemic a pandemic.

And a renowned Chinese respiratory specialist said it could be brought under control by June, if most countries act like China.

In China, new cases have kept declining and the overall epidemic situation remains at a low level, said Mi Feng, a spokesperson for the National Health Commission, at a press conference in Beijing.

Mi said the number of new confirmed cases in Wuhan, the epicentre in central China's Hubei Province, has dropped to a single digit, with only eight cases reported on Wednesday. Only seven new cases were reported on the Chinese mainland outside Hubei, but six were imported from overseas.

Wuhan confirmed the appearance of a new virus in December, which was later named Covid-19. This highly contagious virus quickly spread, with daily cases peaking at over 15,000 on Feb. 12.

China has mobilised the whole country's resources to contain it. Cities were locked down, experts and supplies sent to the epicentre, and hundreds of millions of people across the country stayed at home for weeks to enforce social distancing.

By this week, normality has been steadily returning to China with many provinces and regions lowering their emergency responses, many businesses resuming operation and 87 per cent of the country's entry and exit authorities having resumed service by Thursday.

"China's bold approach to contain the rapid spread of this new respiratory pathogen has changed the course of a rapidly escalating and deadly epidemic," a China-WHO joint mission on Covid-19 said.

WHO officials have on many occasions commended China's response, and encouraged other countries to learn from its experience.

By Wednesday, China had seen more than 62,000 patients discharged from hospital after recovery. In Wuhan, 13,462 patients were still being treated, with 4,003 in severe condition.

The top priority now, Mi said, should be given to treating patients and vowed no relaxation or loose efforts in the epidemic prevention and control work.

But China's good news is complicated by rapidly developing situations around the world. The WHO on Wednesday said the Covid-19 outbreak can be characterised as a "pandemic."

There are now more than 118,000 confirmed cases in 114 countries and regions. WHO Director-General Tedros Adhanom Ghebreyesus warned that the number is expected to climb even higher in the days and weeks ahead.

The WHO's characterisation of the Covid-19 outbreak as a "pandemic" was to call on its members once again to make further political commitment and put in more resources to turn things around in the battle against the disease, Mi said.

Mi said China is paying close attention to the current rapid global spread of the epidemic, and will continue to strengthen cooperation with the WHO and relevant countries to contribute to the global viral fight.

Chinese respiratory specialist Zhong Nanshan said China's experience and lessons over the past two months can help the world reduce the spread and deadliness of the outbreak.

If most countries act like China, he said, the global Covid-19 pandemic could be brought under control by June. - Xinhua 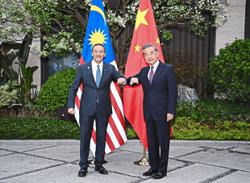