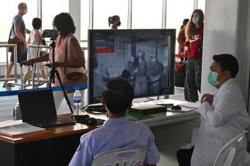 PHNOM PENH (Vientiane Times/ANN): Industries that produce pollution may have to pay more taxes now that the Lao government has embraced the National Green Growth Strategy.

Under the strategy, which Prime Minister Thongloun Sisoulith endorsed on Jan 30, the Ministry of Finance will impose taxes to discourage industries from producing pollution and harmful waste.

At present, industries pay corporate tax, which is calculated at 24 per cent of a company’s profit, as well as excise, value-added, and income tax.

Tax officials cannot yet say what form this new tax would take. But what is clear to the media is that such a tax would be imposed to deter companies from producing pollution.

In some countries, governments impose a carbon tax, which is levied on companies that release greenhouse gases into the atmosphere. However, many countries see this tax as reducing the competitiveness of their economies.

In addition to the environmental protection tax, the finance ministry may also impose taxes in support of energy saving, efficient use of natural resources, and fairer distribution of wealth, in support of the new strategy. The government plans to implement the initiative from now until 2030.

To promote green growth, the strategy advises the finance ministry to reduce taxes or offer tax exemptions to businesses that import modern and environmentally friendly technologies and machinery, so that Laos can reduce the amount of environmental damage.

The finance ministry is also recommended to levy low or no taxes on green products so that businesses can make their operations more competitive. This would result in green products being cheaper so that more people would be encouraged to use them.

In rolling out the green growth strategy, the banking sector must introduce monetary policies that favour investment in environmentally-friendly operations. This would mean that companies that committed to producing less pollution would be able to get easier access to finance.

In addition, companies that are committed to protecting the environment would be able to get lower interest rates on bank loans.

According to a report from National Economic Research Institute president Bouasone Bouphavanh, environmental degradation and climate change are costing the country a lot of money.

At a meeting to discuss measures to implement the green growth strategy on March 5, he said that since 1970 Laos had suffered 33 serious flood events, which had negatively impacted nine million people. The economic cost of the floods totalled about US$4.4 billion.

On average, the economic cost of natural disasters was 2.8-3.6 per cent of the GDP value each year. This was a stumbling block on Laos’ path to graduation from the UN’s list of Least Developed Countries. - Vientiane Times/Asia News Network