My night in a tube home, low-cost housing concept for Hong Kong – cosy, but noisy and, in midwinter, chilly

When I told friends I was planning to spend a night in a renovated water pipe, some were understandably concerned. They needn’t have worried; their image of me sleeping rough in a rusty, old sewer pipe had no bearing on reality. I was booked into an OPod.

A 100 square foot (9.3 square metre) experimental, low-cost home made from two repurposed concrete water pipes, the OPod is the brainchild of Hong Kong architect James Law. Equipped with a small bathroom, tiny kitchen, shelving and a couch that converts into a bed, the micro flat is an example of how the city could tackle its lack of sufficient affordable housing.

Still at the prototype stage, the OPod had never accommodated anyone overnight, I was told, so I nominated myself to be its first guinea pig.

Law, founder of James Law Cybertecture, dreamed up the OPod while on a construction site. “I thought, ‘Wouldn’t it be funky if I could get some of these tubes and convert them into an experimental house’,” he says. “That’s how the OPod came about – seeing these construction materials and also constantly worrying, like everyone else, how to save for a place to live in Hong Kong.”

A home you can buy for US$15,000? It’s not a pipe dream in world’s priciest real estate market, Hong Kong

The OPod costs around US$15,000 – the cost of purchasing the mass-produced pipes and fitting them out – and Law bills it as an affordable option to help ease the city’s housing crisis. He says the durability of the pipes means they can be stacked on top of each other in tight, unused spaces in the city.

Since 2003, Hong Kong’s housing prices have risen by 430 per cent, making it one of the world’s least affordable cities, according to the Demographia International Housing Affordability Survey. 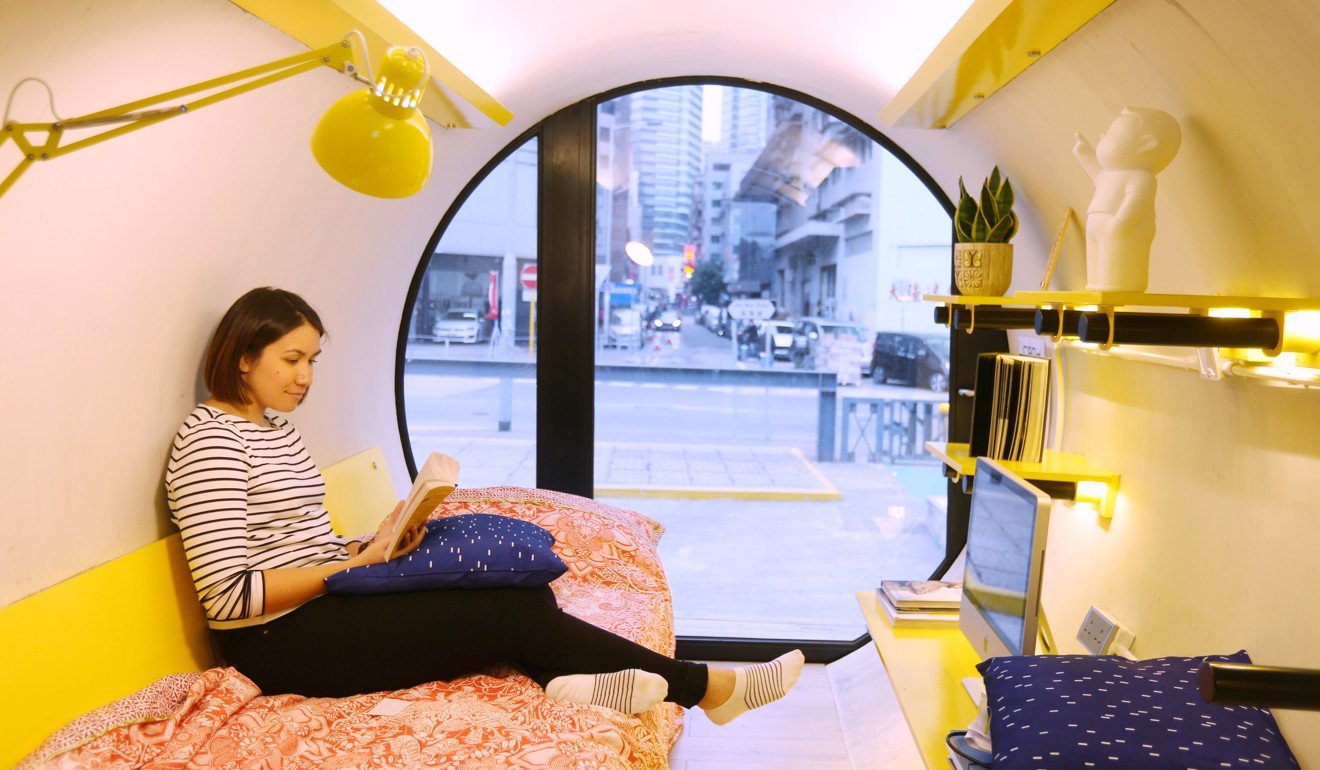 Does Hong Kong have a housing crisis? The answer depends on whether you own a flat

Some families have resorted to extreme measures to find housing in Hong Kong, living in so-called coffin homes, which can be as small as 25 square feet. The OPod is about four times that size.

“I really made OPod as a little piece of inspirational creativity. I want young people to see architects are not just creating commercial buildings but are also experimenting with novel ideas that tackle some of the things they are facing,” Law says.

So is this tube home a pipe dream or could it become a reality? I packed an overnight bag and headed to the OPod on public display in Kwun Tong, an industrial part of East Kowloon, to find out. 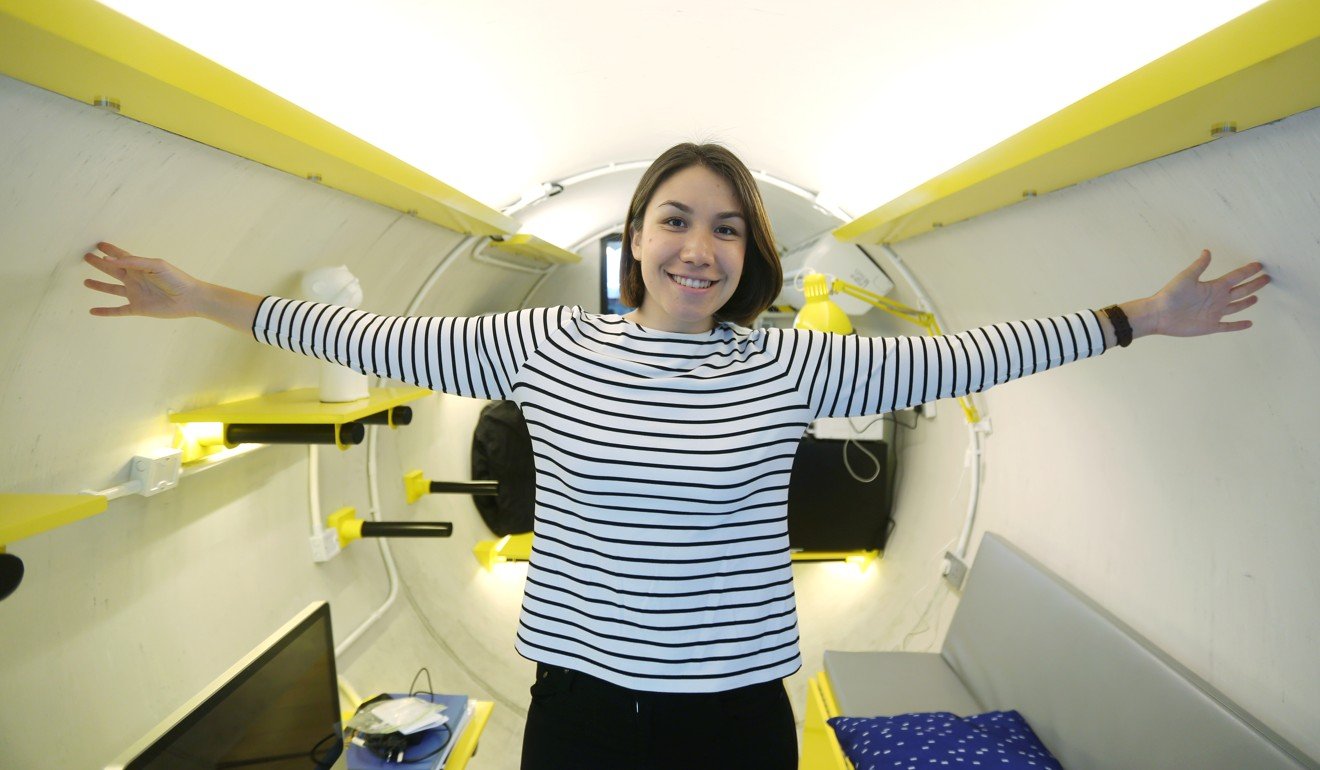 With a diameter of 2.5 metres (8 feet), the tube home felt quite roomy, despite its limited floor space. Thanks to curved walls and built-in furniture, the space was cosy and not at all claustrophobic.

I want young people to see architects are ... experimenting with novel ideas that tackle some of the things they are facing
James Law

Also, Law has employed a few lighting tricks to make the interior feel less cramped; light points upwards and into the curve, which streamlines the walls.

At one end of the tube is a wet room containing a toilet and a shower built into the wall. The kitchen is within the main compartment and consists of a small sink, micro fridge and microwave. I made instant noodles for dinner; cooking something more substantial would have been challenging because there is no bench space. 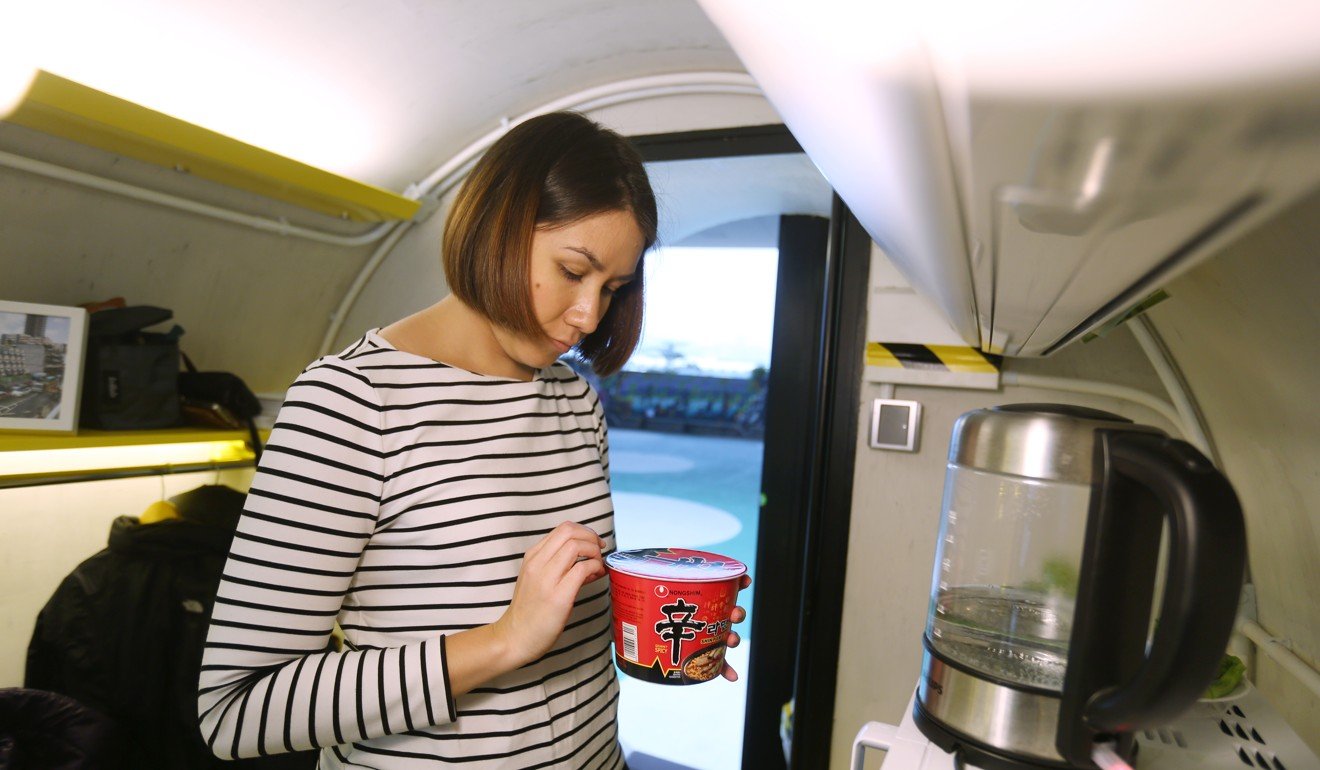 A clothing rack and a number of shelving units can be removed, or moved around. There is also a couch that opens into a large single bed to fit one tall person comfortably.

Law has added no insulation to the thick concrete walls. Unfortunately, the night I chose to stay was one of the chilliest in Hong Kong this year, and with no heater provided, I was cold! It was eight degrees Celsius (46 degrees Fahrenheit) outside, and 11 degrees inside, which is why the security guards took pity and gave me hand warmers. 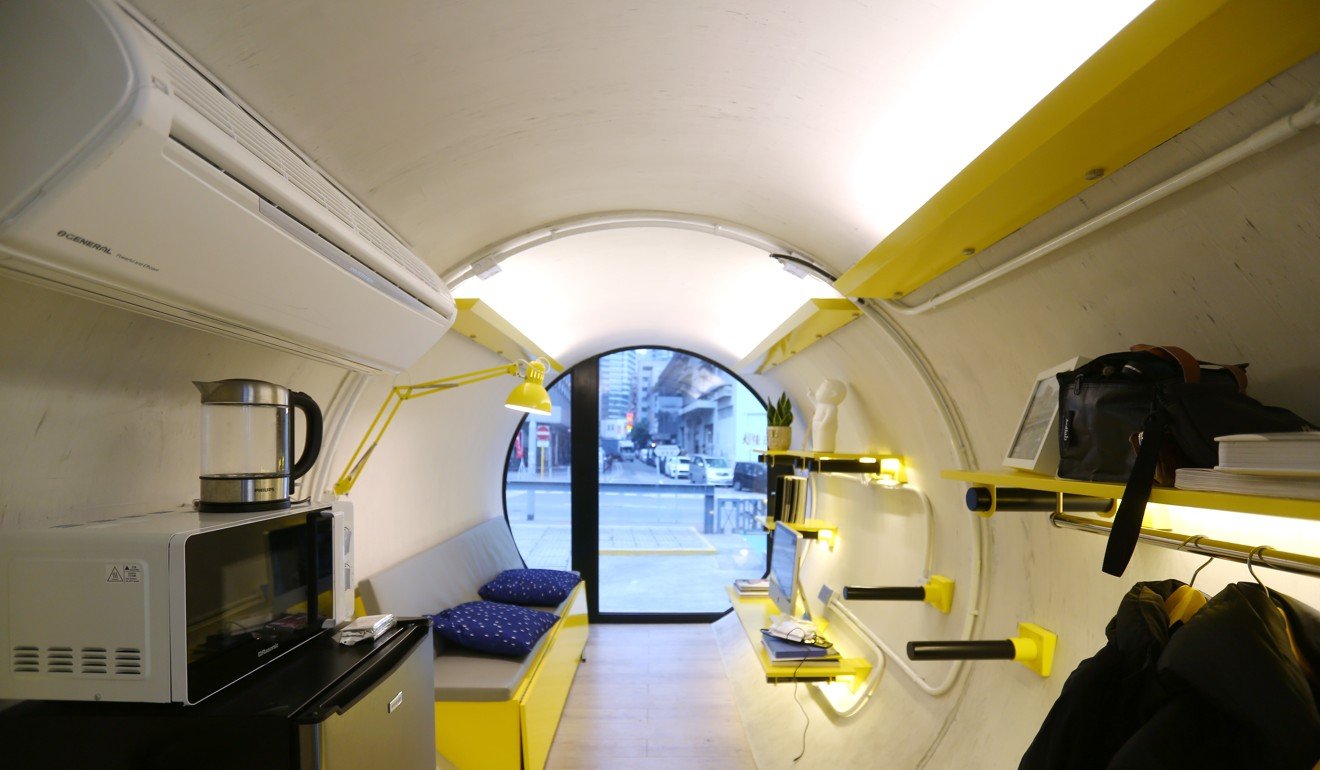 Had there been a heater, however, I’m sure the thick slab would have kept the heat in and made it more comfortable. In summer an air conditioner helps cool the room.

At both ends of the tube are glass doors. If the OPod is taken to the next stage and mass-produced, I would suggest double glazing for insulation and noise purposes. Traffic and the group of 20 men outside my window playing Pokemon Go (yes, apparently that is still a thing) until the early morning kept me awake. 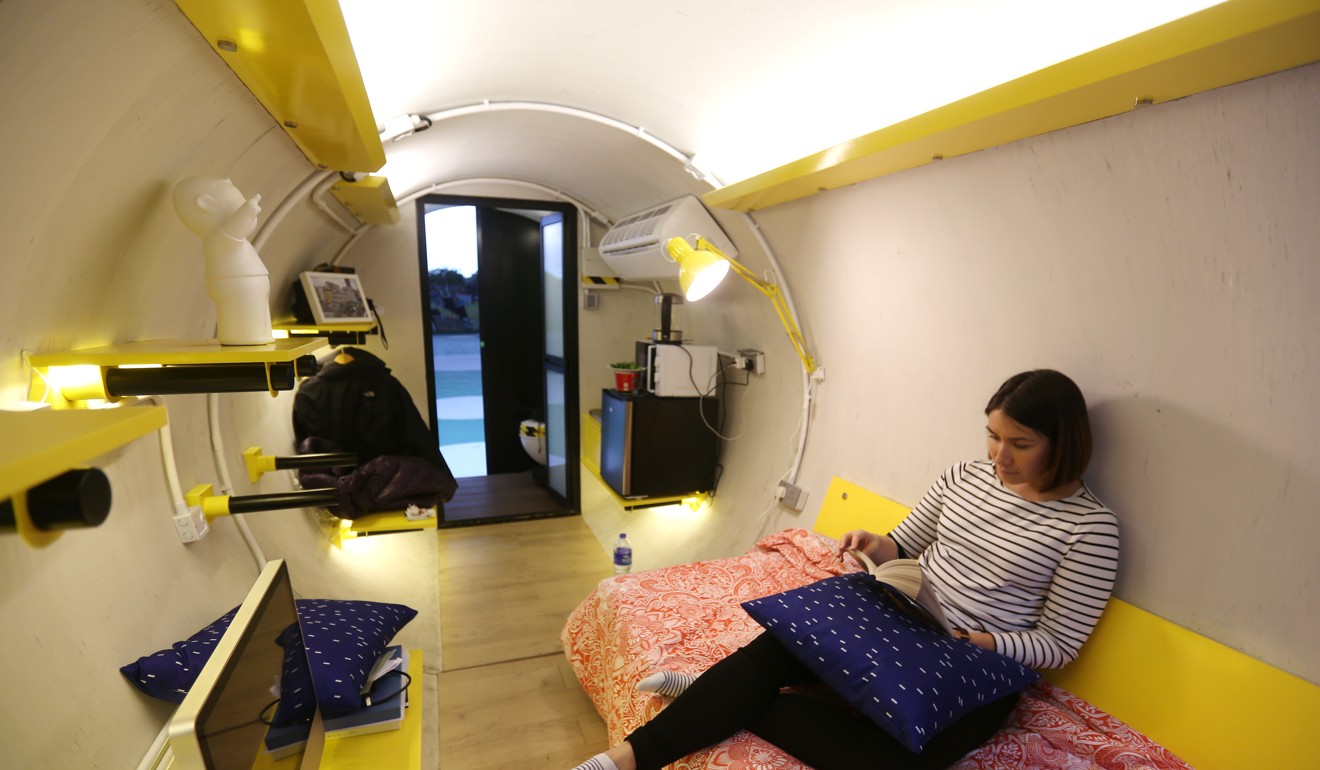 Law has suggested OPods could provide a temporary home for up to two years for people on a waiting list for a public housing flat or saving for a home deposit. Despite the cold and the noise disturbing my sleep, I found its design to be innovative and believe it can provide temporary accommodation. However, I would say people could only live in one for a few months, rather than two years, because of its lack of storage space.

Living in an OPod, or any prefabricated home, in Hong Kong would land occupants in a legal grey area. Law hopes the authorities will “allow for a new class of building which is transient or modular”. 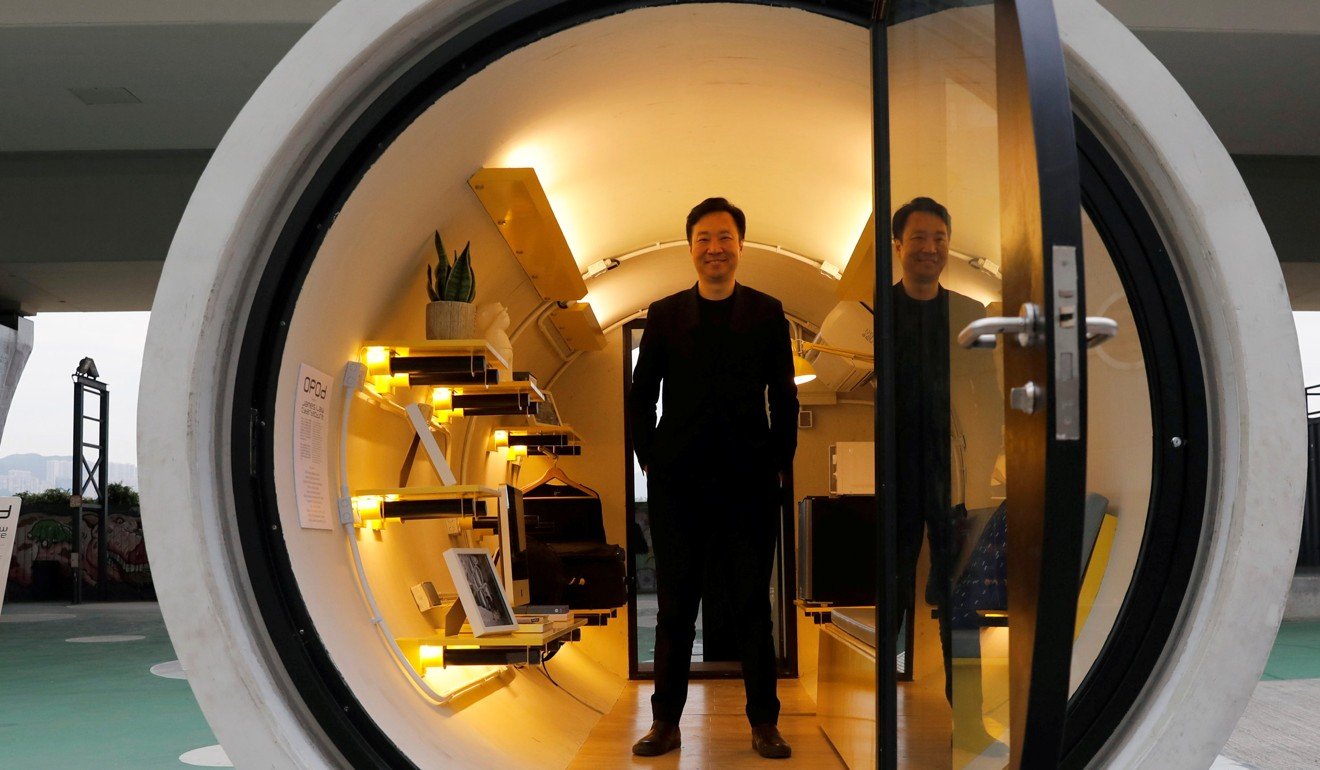 He would be happy for his design to be taken forward by other organisations with his design help.

“There is a need for us to be innovative in terms of how we design and build our cities,” he says. “So people can have a better environment, a more affordable environment. And I think that leads to a new generation of architecture.”