Dish with a longer history on both sides of the Causeway

A new revelation says the famous four chefs widely credited with creating ‘yee sang’ never claimed to have invented the dish but had put their own spin on the traditional raw fish salad enjoyed by the Teochews and Cantonese.

THE auspicious yee sang or raw fish salad is meant to bring harmony and unite people during Chinese New Year. But the popular festive dish has instead triggered a food fight in the media in Malaysia and Singapore.

For the past week, a controversy has been cooking in the Malaysian media with newspapers saying that the dish originated in Malaysia, not Singapore.

The food fight then picked up steam when Singapore readers joined in to dispute the oft-reported claim that four chefs in Singapore had introduced the yee sang in 1964. These readers said they had been eating yee sang as far back as the 1930s.

It is enough to give Chris Hooi, 46, executive director of Dragon Phoenix Restaurant, heartburn.

He is the son of Hooi Kok Wai, 74, one of the famous four chefs widely credited with creating the dish.

He now says that his father and the three chefs never claimed that they “invented” yee sang.

What they did was to put their own spin on the traditional raw fish salad that is enjoyed by the Teochews and Cantonese – raw fish slices served with either sliced cucumber and turnip or shredded ginger and sliced chilli.

The senior Hooi, along with Sin Leong, the late Tham Mui Kai and the late Lau Yoke Pui, were dubbed the Four Heavenly Kings of Singapore’s restaurant scene in the 1960s.

They added different types of shredded vegetables such as carrots, pickled ginger and green radish to brighten up the colour of the raw fish dish and came up with a special sauce, which included plum sauce, kumquat paste and sesame oil, to standardise the taste.

Hooi, acting as a spokesman for his father, said the lo hei tradition in which waiters chanted good wishes as they poured the seasonings and spices over the dish and diners stood up to yell auspicious sayings as they tossed the salad was a recent evolution.

“Everything happened by chance. There was no standard operating procedure of asking people to stand up and shout well wishes.”

He added that way back in the 1960s, only three auspicious sayings were chanted over the dish.

One saying was da ji da li (Chinese for good luck) because lime was used in the dish.

The last saying was huang jing man di, which translates to a floor full of gold, in relation to the deep-fried crackers.

Today, as many as 10 auspicious sayings are uttered over the dish.

The younger Hooi also said that the chefs’ reinvention of the dish took off in Singapore only in the late 1960s.

“When it was introduced, people were sceptical when everything was served in one dish. They were used to having yee sang served in small portions with seasoning provided separately.”

According to Tan Koh Tiang, executive secretary at the Teochew association Teochew Poit Ip Huay Kuan, who is in his 60s, the raw fish dish actually dates back to the early 1900s and has its origins in Guangdong, China.

He said the Cantonese version originated in the Shunde district while the Teochew version was from the Chaoshan region.

The dish is traditionally eaten on the seventh day of the Chinese New Year, known as ren ri, or the birthday of mankind. But it is now eaten in the days leading up to Chinese New Year and during the 15 days of the festive period.

While the Malaysian press claims that Malaysian chefs invented the yee sang dish in 1952, it is evident that the dish has a longer history in both Singapore and Malaysia.

An article in the now-defunct local newspaper The Singapore Free Press in 1948 on Chinese New Year customs referred to the raw fish dish, yue sang, as known to the Cantonese, and stated that the raw fish was flavoured with vinegar and sauce.

Food consultant Violet Oon, 62, likens the current debate over the origins of the dish to similar debates in countries with a mixed culinary heritage.

“Spaghetti is from Italy, but spaghetti and meatballs is an American tradition. Likewise in Britain, chicken tikka is found everywhere there, but can they claim it’s theirs? Immigrants have come and made something different and there’s nothing wrong with that,” she said.

MP Baey Yam Keng, who talked about yee sang in his recent column on Chinese New Year customs in the Chinese section of My Paper, said: “I don’t think Singapore needs to lay claim to yee sang. The dish has clearly evolved over the years, and even if it is made a local trademark, does it mean anything? What matters is that this custom is still practised and people love it.” — The Straits Times/ Asia News Network 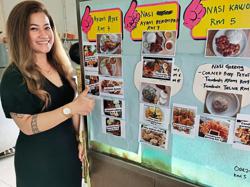 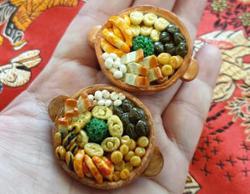