ONLY one in a thousand make it as a fighter pilot in the Republic of Singapore Air Force (RSAF), and Lieutenant Yusri Abu Bakar, 25, not only made the cut but also secured the distinction of becoming the first Malay Singaporean fighter pilot.

The young lieutenant got his wings in October 2001 and completed his F-16 training a year later.

To earn the coveted wings, he went through 26 months of pilot training.

Lt Yusri, who was with the police force for a year after finishing his A levels, signed up with the RSAF in 1998 to pursue his childhood ambition of being an air force pilot.

At the start of the RSAF Open House at Paya Lebar Airbase Saturday, visitors made a beeline for the fighter jets, each manned by RSAF personnel like Lt Yusri, who posed for countless snapshots with visitors and answered their questions about the F-16 Fighting Falcon.

The first Malay Singaporean to become an air force pilot was Lt Mohamad Zakir Hamid in 1992, and he used to fly transport planes.

According to a Ministry of Defence spokesman, he is now a major and a flying instructor at the air force’s Flying Training School in Pearce, Western Australia.

And does Lt Yusri himself feel additional pressure to perform, being the only Malay fighter pilot in the RSAF?

He said: “Pressure? I don’t think so. I’m here to do my job, like everybody else.” – The Straits Times/Asia News Network 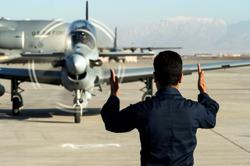