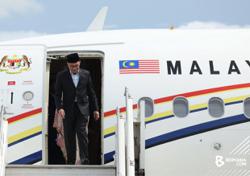 BANDAR SERI BEGAWAN: Prime Minister, Datuk Seri Anwar Ibrahim, who is on a two-day official visit to Brunei, was granted an audience with the Sultan of Brunei, Sultan Hassanal Bolkiah, at Istana Nurul Iman, here on Wednesday (Jan 25).

Anwar, who was accompanied by his wife Datuk Seri Dr Wan Azizah Wan Ismail, arrived at the palace at 11.05am.

The Prime Minister and the Sultan of Brunei also witnessed the signing of a memorandum of understanding (MOU), between the Malaysian Investment Development Authority (Mida) and the Brunei Investment Agency (BIA).

The Malaysian delegation was then feted to a luncheon, hosted by Sultan Hassanal Bolkiah.

This is his second official visit abroad after being appointed as Malaysia’s 10th Prime Minister in November last year.- Bernama Man found dead inside car in Penampang
Covid-19 Watch: 236 new cases bring total to 5,035,613
Unbowed, unbent, unbroken, says Khairy over Umno sacking
Applications for foreign workers up significantly under new plan
Malaysia expected to become a ‘super-aged nation’ by 2056
‘Give pharmacists more positions’
How to be penny and pound wise for the golden years
PM receives congratulatory message from Biden
Varsity dream realised after years of toil
S’gor, Pahang to boost safety of slopes at border