PUTRAJAYA: The Agriculture and Food Security Ministry hopes to be given more allocations in the face of a possible economic and food crisis next year.

Its newly appointed minister Mohamad Sabu said this is also to smoothen ministry operations and ensure all of its plans are in order.

“The main problem is allocations, which we are confident the Finance Minister, who is also the Prime Minister, will look into because the ministry is also on the front lines in facing the economic and food crises that may happen in the future.

“Even now, some basic food items are still considered pricey ... we will try to play a role in stabilising prices, (and) federal allocations must be increased to ensure smoother operations,” he said when met by reporters after attending a briefing with ministry officials here yesterday.

Meanwhile, Mohamad said the issue of reasonably priced food items will be among the main agendas of the ministry under his helm.

This includes the uncertainty of supply and price of chicken eggs, he said, adding that because eggs are a common food for all levels of society, issues surrounding them should be taken seriously.

“In addition, the issue of sufficient food, at an affordable price, is very important because that is what Prime Minister Datuk Seri Anwar Ibrahim emphasised before the 15th General Election and after taking his oath ... the issue of food security needs to be taken seriously.”He said the ministry will continue with existing plans, and new ones will be discussed with senior ministry officials.

“It’s a new area for me; before this, I was speaking on national security while at the Defence Ministry, and now it will be on issues affecting the daily lives of people, namely food and agriculture. This will be my challenge,” he told Bernama.

Mohamad clocked in to officially begin duties at his office at Wisma Tani here at 1.35pm. 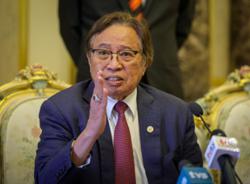