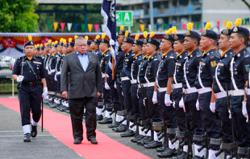 SIBU: Some 22 people, including six women, have been detained in a state-wide crackdown on illegal betting on Qatar World Cup matches.

The suspects were nabbed in 20 raids carried out under Ops Soga XI from Nov 19 to Dec 3.

"Ops Soga IX was launched simultaneously in all districts in the state with 20 raids carried out.

The suspects, 19 locals and three foreigners aged from 18 to 53 years were arrested," said Sarawak Commissioner of police Datuk Mohd Azman Ahmad Sapri at a press conference on Sunday (Dec 4).

He said there were four raids conducted by state police headquarters, Bintulu (five), Kuching (three), Padawan (three), Miri (two) as well as one each in Sibu, Sarikei and Kota Samarahan.

He said 20 investigation papers have been opened and investigated under the Open Gambling Act 1953.

"All those arrested have been remanded," he said.

Comm Azman said that during the raid, police also confiscated cash amounting to RM3,983, various digital devices like computers and smartphones as well as betting slips.

"Those with information about gambling activities can channel it to the Op Soga IX WhatsApp hotline at 013-525 3052," he said.