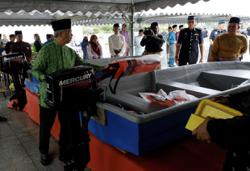 Sultan Abdullah handing over five fibreglass boats to Pekan district residents ahead of the monsoon season on Dec 2, 2022. – Bernama

PEKAN: The Yang di-Pertuan Agong Al-Sultan Abdullah Ri'ayatuddin Al-Mustafa Billah Shah has handed over five fibreglass boats to residents of the Pekan district ahead of the monsoon season.

"The boats are for your use and residents affected by the flood to help your neighbours and others. Also, don't sell the boats," said His Majesty when presenting the boats to five recipients.

The handing-over of the boats was held in the compound of the Sultan Ahmad Shah Mosque here on Friday (Dec 2) after Al-Sultan Abdullah, accompanied by the Regent of Pahang Tengku Hassanal Ibrahim Alam Shah, joined the congregation for Friday prayers.

Meanwhile, Mohamad Fahamy Mohamad Sarif, 49, of Kampung Pelak, said it was surprise gift from His Majesty.

"I was lost for words when informed that I would receive the boat because every time floods occur, I have to borrow someone else's boat. Now that I have my own, it will allow me and my family – as well as our neighbours – to evacuate.

"Sometimes, it takes a long time for us to wait for the security team to arrive," said the gardener who has three children.

"I'm moved by His Majesty's concern. Every time there is a flood, our house will be affected because it is located near the river," said the food stall assistant. – Bernama