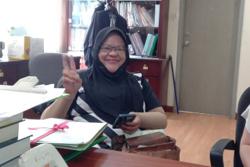 Fauziah all smiles after being acquitted and discharged of charges of cheating three people over a series of land transactions.

KOTA KINABALU: A language teacher was overcome with emotion after being acquitted and discharged of charges of cheating three people.

Fauziah Halim, 45, who teaches English at SMK Tansau in Penampang, was acquitted and discharged by magistrate Kasyfurrahman Abang Ahmad on Tuesday without her defence being called.

The Magistrate’s Court in Labuan held that the prosecution had failed to establish a prima facie case.

After Kasyfurrahman read out the grounds of his decision, Fauziah broke down and cried, expressing her gratitude to the court for the decision.

She also thanked her counsel Datuk Seri K. Rakhbir Singh for the work he had put in for her.

Fauziah had pleaded not guilty to cheating three people under Section 420 of the Penal Code over the purchase of land at Kampung Bukit Kuda in Labuan.

In the first charge, she was alleged to have cheated one Salmah Abdul Rahman at 11.19am on April 11, 2016, by inducing her to release RM5,000 in relation to the purchase of a land lot in Kampung Bukit Kuda.

She was alleged to have induced the same person to release RM72,500 on June 7, 2016, also in relation to the purchase of the said land.

For the subsequent charge, Fauziah was alleged to have cheated one Nor Aslinda Yaacop to part with RM20,000 on Jan 31, 2018, also in connection with the purchase of another lot on the same land.

For the final charge, she was alleged to have cheated one Zainol Anuar Mohd Noor to part with RM40,000 on Jan 10, 2017, for the purchase of another lot on the same land.

The charges were punishable with up to 10 years in prison and whipping as well as a fine.

The prosecution was led by deputy public prosecutor Suriyati Jumain.