PETALING JAYA: A document purportedly from Barisan Nasional on 30 MPs who have signed statutory declarations (SDs) in support of Datuk Seri Anwar Ibrahim and names of leaders to be made ministers is fake, says the coalition.

In a Facebook post, Barisan said the statement congratulating Anwar on his appointment as the Prime Minister with the conditional support signed by secretary-general Datuk Seri Zambry Abdul Kadir is false.

It is also claimed in the statement that Barisan is grateful to Anwar for fulfilling a pledge to appoint a deputy prime minister from the coalition as agreed in a meeting between Barisan and Pakatan Harapan leaders in Seri Pacific in Kuala Lumpur on Nov 21.

The statement also contains allegations that Umno deputy president Datuk Seri Mohamad Hasan is to be made deputy prime minister and that several Umno leaders are to be given specific portfolios in Cabinet. 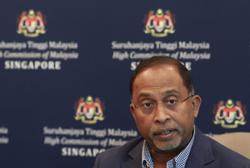