KOTA BHARU: Kelantan has on past occasions requested the Malaysian Armed Forces and relevant authorities to deal with trespassing of forest reserves in the state, says Menteri Besar Datuk Ahmad Yakob (pic).

He said the teams involved had carried out specific operations to monitor encroachment by illegal loggers.

"We (the state government) have previously asked for cooperation from the military and other authorities to protect the forest in addition to conducting operations to prevent poachers," he said.

He was replying to an additional question from Mohd Adanan Hassan (PAS-Kelaboran) regarding the state government's efforts in dealing with forest encroachment in the state at the Kelantan State Assembly sitting in Kota Darulnaim here on Sunday (Nov 27).

Ahmad said the state government, through the state forestry sub-committee, has always held discussions with the relevant parties to curb encroachment.- Bernama 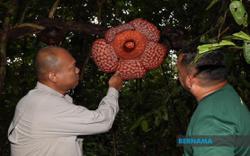