All but one Sabah MPs support unity government 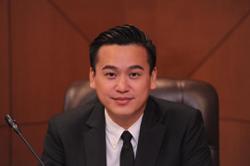 KDM president Datuk Peter Anthony handed over his party's letter of support to Anwar at his office in Putrajaya Friday (Nov 25).

KDM, through Datuk Wetrom Bahanda, won the Kota Marudu seat while his brother, Datuk Verdon, won the Kudat seat as an independent while a third independent Riduan Rubin won the Tenom seat.

In a statement, Anthony said that there was a need for a stable Federal Government in the interest of the country. KDM has agreed with the King for the formation of a unity government.

He said that the unity government must be inclusive with representation from Sabah and Sarawak.

With KDM and the independents throwing its support for Sabah, 24 of 25 elected MPs from various parties in Sabah have affirmed their support for Anwar under the unity government.

With KDM the latest to throw in their support, the others were Gabungan Rakyat Sabah (GRS) with six MPs, Warisan (three MPs), Sabah Pakatan Harapan (five MPs) and Sabah Barisan (seven MPs).

Kiandee, who is vice-president of Parti Pribumi Bersatu Malaysia (Bersatu), has remained with the Perikatan stand not to join the unity government.