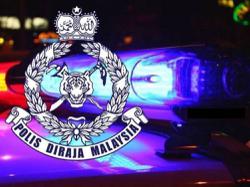 GEORGE TOWN: Police here have raided premises at Penang Road here and crippled a gang of eight people from the Philippines who had been robbing people.

He added that a local man was also arrested with the eight in the Nov 15 raid conducted by the state police contingent and George Town police headquarters.

"We initially received a police report from a Bangladeshi man who was robbed by several men who claimed to be policemen near a money changer's premises in Jalan Penang here at 4pm on Nov 13 involving a loss of RM14,800 in cash,” said Comm Mohd Shuhaily.

He then said that the police then launched an operation and added that information was then received about another robbery in the South West district.

Comm Mohd Shuhaily said that the suspects were then arrested after police personnel followed two cars driven by a group of suspects.

He added that the suspects are aged between 30 and 50 and are believed to have been involved in seven robberies netting RM42,600 in Penang, Kuala Lumpur and Melaka.

Comm Mohd Shuhaily said at a press conference on Wednesday (Nov 23) that the group is believed to have been actively involved in criminal activities since early this year and the Philippines nationals are believed to have entered the country through a social visit pass.

He said that the initial investigation found that the group's modus operandi was to impersonate police officers and detaining foreigners, adding that they would rob their victims after claiming that they were allegedly involved in a crime.

"During the arrest, police seized 13 smartphones of various brands, 33 bank card, clothes, passports RM6,265 in cash and some Philippine currency," he said, adding that police also seized two cars that were rented by the suspects for the past two months.

All suspects tested negative for drugs, and a check found that the local suspect has two prior cases in his criminal record.

Comm Mohd Shuhaily then said that all suspects have been remanded for 10 days, adding that the case is being investigated under Section 395 and 170 of the Penal Code.