The state Barisan and Umno chairman added that this comes as 60% of their candidates were new faces and 30% out of their 26 candidates would consist of women.

"Umno will be contesting 17 parliamentary seats in Johor including Simpang Renggam while MCA contests eight seats and MIC one seat.

"Unless there is some swap directive coming from Barisan headquarters, these are the seats that will be contested between component parties in Johor as Barisan would go solo in GE15," he added.

Hasni, who is also Umno supreme council member and Pontian division chief, said this after officiating the division Puteri wing meeting held at its headquarters here on Friday (Oct 7).

He also said that Barisan had appointed him as its Johor election director while Mentri Besar Datuk Onn Hafiz Ghazi as the state operations director for GE15. 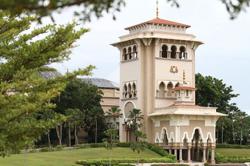