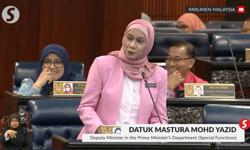 KUALA LUMPUR: Elections have been held before when the nation was facing the annual year-end flood season, says Datuk Mastura Mohd Yazid.

"Based on records, the general election was held in December in 1999 while the Sarawak state polls were held on Dec 18, 2021.

"The Special Task Force on Floods held a meeting on Oct 3 which was chaired by the Chief Secretary to the Government Tan Sri Mohd Zuki Ali where discussions were held on the possibility that the general election is held during the northeast monsoon season," said the Deputy Minister in the Prime Minister's Department (Special Functions) when answering a supplementary question raised by Khoo Poay Tiong (PH-Kota Melaka) in Dewan Rakyat on Thursday (Oct 6).

She said Prime Minister Datuk Seri Ismail Sabri Yaakob had taken into consideration the views of agencies such as the Malaysian Meteorological Department (MetMalaysia), National Disaster Management Agency (Nadma), Election Commission (EC) and Irrigation and Drainage Department (DID) on deciding whether to call for early polls.

Khoo wanted to know if Ismail Sabri Yaakob had taken into consideration views of relevant agencies including the EC on whether the polls should be held during the year-end flood season.

Mastura also said the task force has fine-tuned all the necessary measures to face such a possibility.

"All machinery to handle floods are ready and at their optimum level to face any possibility if the general election is held during this monsoon period," she added.

Earlier, Mastura informed the House that a total of 26,989 volunteers from 120 non-governmental organisations participated in flood relief efforts during the year-end floods last year.

On Sept 29, MetMalaysia director-general Muhammad Helmi Abdullah said that the nation would enter the transitional phase to the northeast monsoon beginning Oct 3 until November.

The north-east monsoon is between early November and March and is usually characterised by heavy showers and thunderstorms.

The 2021 floods that hit several states resulted in the evacuation of almost 20,000 people, and an estimated loss of at least RM20bil.

A total of 55 people were killed in the floods from December 2021 to January this year.