133-year-old temple rises from the ashes BUKIT MERTAJAM: The 133-year-old Hock Teik Cheng Sin Temple, which was almost razed in a fire three years ago, has finally been rebuilt to its old glory.

The temple will be reopened to the public next Saturday after a three-year closure for the large-scale restoration.

The new temple, while retaining most of its original design, is almost completely rebuilt after the fire in 2019.

“During the fire on July 3, 2019, about 70% of the temple that was built in 1886 was razed and almost everything in it was damaged – with only charred wooden pillars and roof beams left standing.

“Fortunately, we had already made plans for restoration in 2015 and had documented all images and dimensions of the temple then.

“We retained the three original walls and two granite pillars of the building.

“Local architects came on board to help rebuild the new temple, according to the original specifications.

“Artists and many of the materials were sourced from China, and we experienced an eight-month delay during the movement control order,” he said recently.

Bey said the project includes upgrading the roadside hawker stall area next to the temple with two new blocks of commercial shoplots with a covered walkway.

“There are now 17 double-storey shoplots to be rented out, with the upper floor of some of the units converted into an exhibition space.

“To retain the old look of the buildings, they feature metal scissor doors made by local blacksmiths.

“About 40 hawkers who were relocated elsewhere during the construction period will return,” he said.

Prayers and rituals are ongoing on a daily basis followed by a consecration ceremony on Tuesday, before the temple is open to the public on Oct 8, while the official opening ceremony is scheduled for Oct 16.

Among ongoing preparations are laying out of five dragons on a platform using rice and gold coins at the front of the temple, representing four dragons guarding the main dragon in the middle of the temple.

Founded over 130 years ago by early Chinese settlers, the temple is a popular landmark here. 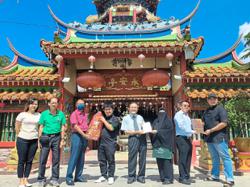