PUTRAJAYA: Gabungan Tanah Air (GTA) has applied to the Registrar of Societies (ROS) to become a legal entity in order to contest in the 15th General Election, says its protem chairman Tun Dr Mahathir Mohamad.

He said that its top leaders from four parties had met with the ROS director-general to discuss and submit all the relevant documents needed for the registration process.

“In order to allow us to contest in GE15, we have taken the necessary steps based on the law to register as a political coalition,” said Dr Mahathir in a statement read out by GTA secretary-general Datuk Marzuki Yahya at a press conference outside the ROS headquarters yesterday.

Dr Mahathir was not present as he is still under observation after being discharged from the hospital due to Covid-19.

On Aug 4, Dr Mahathir announced the setting up of GTA, a coalition representing those from the field of economics, professionals, academicians and activists.

Dr Mahathir had previously said that GTA would contest 120 parliamentary seats in the peninsula, which is where the majority of Malay voters are, and where Umno had contested.

Marzuki hoped that ROS would expedite the approval of the application as there is much talk about the GE15 being held soon.

“We had a fruitful meeting with the ROS and we have raised various issues that might delay the approval of our application.

“They took note of our concerns and I hope that they will give the green light soon,” he added.

He said GTA would use the symbol of a torch.

“We will bring the light to the all rakyat,” said Marzuki.

Asked to comment on remarks made by Opposition Leader Datuk Seri Anwar Ibrahim that Pakatan Harapan held a different view from GTA on multiculturalism issues, Marzuki hit back by questioning why it was seen as wrong to champion Malay rights.

“GTA is a coalition made up of a movement of Malay groups. We are here to address the problems created by the Malay leadership and we aspire to give a better leadership without compromising the rights of other races.

“If this is seen as doing something wrong and without having principles because of our intention to help the Malays, I do not know what to say.

“We will do anything for our community,” he added.

Mukhriz, who was present at the press conference, also hoped that ROS would give its approval to the GTA soon.

“Our intention is to contest in the GE15. We are all from different parties but we believe it is better to work together to avoid any clashes,” he said. 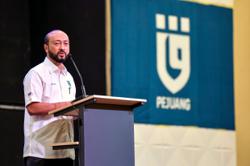