KLIA Aerotrain upgrade to be completed by March 2025 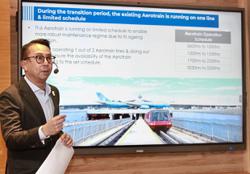 Its managing director Datuk Iskandar Mizal Mahmood said the asset replacement programme (ARP) of the upgrade exercise is currently in the first phase which is scheduled to end in March next year.

"The first phase involves design works, where multiple stakeholder engagements such as with the Transport Ministry are conducted to ensure that the new Aerotrain system meets both local and international transport and safety standards," Iskandar Mizal told a media briefing here on Monday (Sept 5).

During this time, the Aerotrain will run on a limited schedule with only one train in service at any given time.

It will be supplemented with round-the-clock bus services between the main terminal and satellite building.

ALSO READ: KLIA will replace Aerotrain system after over 20 years in service

The nine buses could ferry around 1,800 passengers an hour, he said.

He added that the airport will replace its current fleet with six new airport buses, with the first two scheduled to arrive in November and the remaining four in February.

Each of the new buses will be able to carry up to 110 passengers per trip, double the current capacity, he said.

"They are also innovatively designed with robust and durable structure and equipped with a hydraulic system that aligns with the pavement curb, making it more convenient for passengers with limited mobility.

"Additionally, the buses will also be furnished with WiFi connectivity and digital displays for infotainment, as well as a tracking and surveillance system, and CCTV cameras for improved safety and security," he added.

Iskandar said the airport buses will be at par, if not better than, those being used in major international airports around the world.

The second phase between March next year and March 2025 will involve construction of the new Aerotrain.

Malaysia Airports chairman Datuk Seri Dr Zambry Abd Kadir said in his speech that the upgrade will effectively enhance KLIA's reputation as one of the world's best airports.

"The current Aerotrain system has been in operation for the last 24 years since the opening of KLIA.

"We are not only replacing the trains but the entire track system so that passengers will experience a renewed, modern service when they move through the airport," he said. 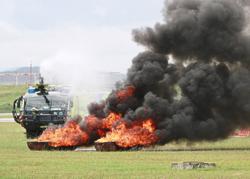