The Barisan deputy chairman said he made this assessment after engagement with the respective coalition leadership in those states.

“Based on our engagement session (here), we found that the level of preparedness within Johor Barisan is already high.

“It could be because the state election is over and their spirits are still high because it was a success for Barisan.

“If you want to know the level of preparedness, Johor Barisan is at eight out of 10,” he said after attending a closed-door meeting with state Barisan leaders at a hotel here on Friday (Aug 19).

Mohamad, who is also Umno deputy president, added that overall, the level of readiness of Barisan’s machinery to face GE15 was very good.

He added that after Johor, he would continue with engagement sessions in Melaka, Perak and Pahang before heading to Sabah early next month.

Mohamad also said all components and the Friends of BN group would move as one instead of representing their respective parties.

"Barisan is a coalition of legitimate political parties, and because of that we will face GE15 and move as a team, not 'party machinery' but the Barisan machinery," he added. 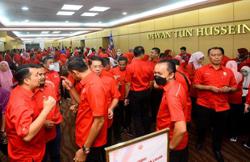