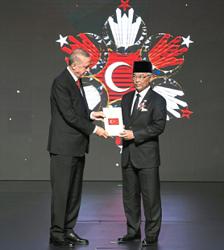 ANKARA: Yang di-Pertuan Agong Al-Sultan Abdullah Ri'ayatuddin Al-Mustafa Billah Shah has been conferred the Turkish Order of the State, the highest award of the Turkish government, in conjunction with His Majesty’s state visit to Turkiye.

Al-Sultan Abdullah received the award from Turkiye President Recep Tayyip Erdogan at the Presidential Palace, making him the first Asean head of state to be given the honour on Wednesday (Aug 17).

His Majesty is among five heads of state conferred the award under the leadership of Erdogan.

The DMN is accorded to a State Ruler but is also bestowed on an honorary basis on a foreign head of state and other most esteemed people.

Apart from Erdogan, the other foreign heads of state conferred the D.M.N were Queen Elizabeth, Emir of Qatar Sheikh Hamad Khalifa Al-Tahni, King Salman Abdul Aziz and Raja Isteri Pengiran Anak Hajah Saleha, the consort of the Sultan of Brunei.

After the award presentation ceremony, His Majesty attended a Traditional Concert hosted by Erdogan.

Earlier, Their Majesties attended a state banquet hosted by Erdogan and his wife Emine Erdogan at the Presidential Palace after being accorded a state welcome.

The King and Queen will have a busy schedule during their seven-day state visit to Ankara and Istanbul. - Bernama 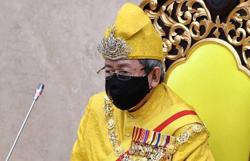