PBM ready to clarify any issues with BN on membership application

PETALING JAYA: Parti Bangsa Malaysia (PBM) is ready to discuss with Barisan Nasional any issues before a decision is made on its application to join the coalition, says Norhizwan Ahmad (pic).

PBM secretary-general said that the party has taken note of the decision made by Barisan's top leadership to postpone the decision for the party to join them as one of its component parties.

"PBM's top leadership is ready to discuss with Barisan's top leadership on any issues or any matters that need to be clarified before a decision is made," he said in a statement on Tuesday (Aug 16).

On late Monday night (Aug 15), Barisan Nasional said it would announce its decision on whether to admit six parties into its fold soon, said Datuk Seri Dr Zambry Abdul Kadir.

Zambry said the application would be scrutinised by the Barisan secretariat, with an announcement to be made in "due time".

Norhizwan said PBM's application to join Barisan is for the nation's political stability and harmony.

"As the oldest coalition in Malaysia, surely Barisan will make the necessary review regarding any matter before making a consensus decision by accepting any new entry," he added.

"PBM appreciates the decision made by Barisan to discuss the matter in more detail before an official decision is announced soon," he also said.

"We believe that any positive changes will be achieved if the country is administered by a stable coalition of political parties and is capable of championing the aspirations of Malaysians as a multiracial country," he said. 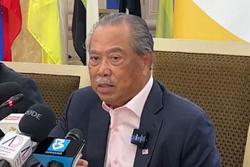