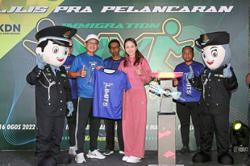 PUTRAJAYA: The Immigration Department will come out with advisory messages to alert the public when they receive job offers from agents with big salary packages.

Immigration director-general Datuk Seri Khairul Dzaimee Daud said the public need to be very careful with such offers as it could be from syndicates duping Malaysians into working as scammers overseas.

He said the department could not bar anyone from leaving the country if they were not on the restriction list.

"If the public surfs social media they could easily find posts by the police advising on such syndicates.

"Immigration Department should also play a role in raising awareness on this issue," he told reporters after officiating the pre-launch of the Immigration Run 2022 here on Tuesday (Aug 16).

Khairul Dzaimee said he had instructed the department’s Corporate Communications Unit to look into the matter.

"I have asked them to come out with some advisory message so that our people will be extra alert when they receive any job offers from agents offering big salary packages," he said.

"The objective is to bridge the gap between the department and the public," he said, adding that they wanted to show the people that Immigration Department was not just about arresting illegal immigrants and conducting raids.

National kegler Syaidatul Afifah Badrul Hamidi who had offered to be the official ambassador for the run said prizes up for grabs including sporting goods, a bicycle and smart watch.

"The public can register for a five kilometre fun run, ten kilometre and 15 kilometre run," she said adding that tickets could be purchased at the www.ticket2u.com.my for between RM50 and RM75. 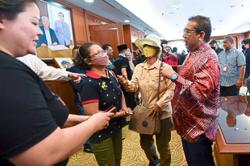