KUALA LUMPUR: A team, known as the Merdeka Quartet, has been formed to assist the National Day and Malaysia Day publicity machinery.

Proposed by the Information Department, the team will help motivate the Malaysian Family (Keluarga Malaysia) to take part in the celebrations.

The Information Department’s media and corporate communications division director, Datuk E. Sivabalan, said the setting up of the quartet was agreed upon during the National Day and Malaysia Day Celebration main committee meeting last Wednesday.

“We will identify the slots on television and radio for the Merdeka Quartet to go on as a group and explain the reason for this year’s celebrations,” he said, adding that Dr Wee and Saravanan would deliver messages in Mandarin and Tamil.

“This is one of our political wills. The Cabinet ministers will be together with the people and be an inspiration to Keluarga Malaysia,” he said on Bernama TV’s Ruang Bicara programme on Thursday.

Sivabalan said public participation in this year’s National Month celebration, which was launched by the Prime Minister on July 31, was quite encouraging.

He said this was proven with the participation of 15,000 people, which exceeded the target of 10,000 people, during the Berjalan Teguh Bersama programme that was held in Putrajaya last Saturday.

On the Fly the Jalur Gemilang campaign, Sivabalan said Malaysians were reminded to fly the national flag as it was a symbol of the country’s dignity that showed their patriotic spirit.

“Fly the Jalur Gemilang in your homes, business premises or offices,” he said. 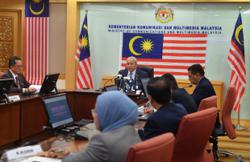