SERDANG: The Health Ministry hopes to regulate the use of vape and ecigarettes in the country once it receives the nod from the Dewan Rakyat through the new Bill to ban smoking among those born in 2005 and later, says Health Minister Khairy Jamaluddin.

For the first time there will be regulations imposed on the vape and ecigarettes industry through the “generational endgame Bill”, he added.

He said the vape industry had been out of control for several years as these products had been marketed to teenagers and children.

“We will be able to strictly control all sales of vape and electronic cigarettes, regulate what they put in the vape,” he told the press after launching the Generational Endgame Advocacy Roadshow (Gegar) Wanita programme here yesterday.

The Health Ministry will be handing over a memorandum to the Cabinet meeting next week on the draft Bill to ban smoking among those born in 2005 and later.

If it is approved at the Cabinet meeting, Khairy said he hoped to table the new law in Parliament this month.

Once approved, he wanted the law to be implemented quickly.

Prior to this, vape and ecigarettes were outside the purview of any law, so once the new legislation comes into effect, taxes can be collected for these items, he added.

Khairy also said his ministry had received feedback from other ministries and would present responses to them during the Cabinet meeting. 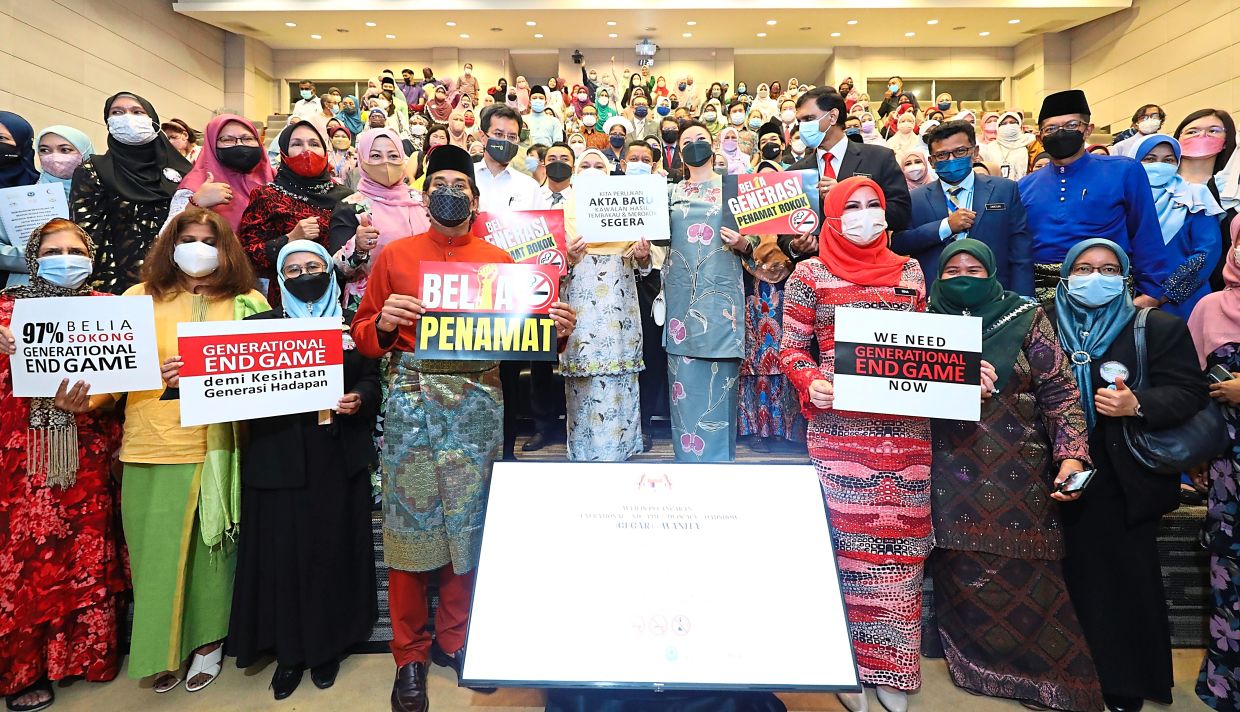 Dousing the flames: Khairy (fourth from left) and Rina (fifth from left) posing for a group photo after launching Gegar Wanita in UPM, Serdang.

“Through our ministry and officers, we have conducted several engagements sessions with relevant parties as well as Members of Parliament. I will be conducting briefings on the new Bill and its impact after the passing.

“I am confident that we will get the support to pass this Bill,” Khairy said.

He added that the ministry was aiming to reduce smoking prevalence among Malaysians to 5% by 2040.

When asked about the lack of support from other ministries due to its economic impact, Khairy said the Cabinet meeting would be a great platform to exchange views and convince them.

He added that the Health Ministry had already been working with the Education and Higher Education ministries as well as the Malaysian Islamic Development Department (Jakim) on several programmes in relation to the new Bill and its advocacy.

She said her ministry would continue to garner further support from other quarters to ensure that the new Bill gets the seal of approval.

“We will try to ensure that this Bill gets tabled in Parliament as we fully support it.

“We also support the generational endgame on smoking and will continue to advocate for it,” she added.

Under the proposed law, children born in 2005 and subsequent years are prohibited from smoking and buying or possessing any type of smoking product, including electronic cigarettes or vape products, even after reaching 18 years of age.

Apart from this, shopkeepers and cigarette vendors are also not allowed to sell smoking products to those covered by the ban.