Cops to investigate those who rent properties for illegal purposes

He said that the police can also summon the owners of those who are renting units on a short-term basis, such as Air BnB operators.

"Unit owners can also face action if crime occurs in their premises as they should know who they are renting to.

"However, it will depend on the type of crime detected in the unit. We can’t hold the owners responsible for rape cases," he said.

He added that unit owners should screen their tenants and must be aware of what is happening in their properties, even when leasing on a short-term basis.

He was asked to comment on the case where a 40-year-old father of two abducted and sexually assaulted a 13-year-old schoolgirl.

The suspect had allegedly rented an apartment unit at Jalan Tun Fatimah to commit the act.

The man was sentenced by the Session Court here on Friday (July 1) to nine years jail and three strokes of the cane for committing carnal intercourse against the order of nature.

He is facing four more charges framed under Section 376(2) of the Penal Code and Section14(a) of the Sexual Offence Against Children Act 2017.

At the event, 71 panic buttons were installed at the Mahkota Parade shopping centre here in an effort to curb crime. 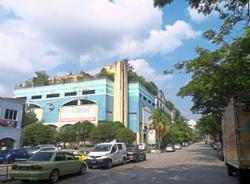