He told the authorities not to leave any stone unturned in the investigations of the case.

“If found to be true, the suspect and his syndicate members must face the full brunt of the law,” said Hajiji a statement.

Home Minister Datuk Seri Hamzah Zainudin in a press conference in Bukit Aman said the politician, identified as Mohd Arshad Abdul Mualap, 48, was detained along with another man - Mohamad Amkah Ahmad, 46, - in Subang Jaya on June 22.

They were charged in court on Thursday (June 30).

Hamzah said the authorities believed the syndicate had been operating for several months now, adding they were selling invalid ICs to those without Malaysian citizenship.

He added the syndicate claimed that the cards, which were also equipped with QR codes, would give its holders benefits, including medical and education.

“We believe the syndicate has duped hundreds of victims. It is learnt that the syndicate sold the cards priced between RM500 and RM1,000,” he said. 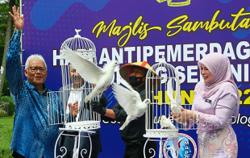