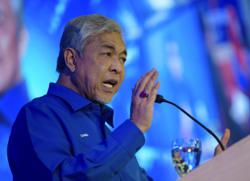 KUALA LUMPUR: Umno president Datuk Seri Dr Ahmad Zahid Hamidi told the High Court that three MPs from Umno defected to Parti Pribumi Bersatu Malaysia after GE14 to “save themselves” from being investigated for corruption.

Ahmad Zahid, in his testimony, said one of MPs who defected was the Masjid Tanah MP.

“I was made to understand that the MP was entrusted with handling the GE funds, but the money was not utilised for Puteri Umno during the general election.

“Instead, the money was taken out of the funds and deposited into a different account for personal use, not for the Puteri Umno machinery,” he said yesterday.

The former deputy prime minister, who was testifying in an examination-in-chief in his corruption trial involving Yayasan Akalbudi (YAB), claimed that this was known by the top leaderships of Umno and Puteri Umno.

Ahmad Zahid said when investigations were about to commence, the MP joined Bersatu, which was a part of the then Pakatan Harapan government, and therefore “saved”.

He also said that the Jeli MP, who was entrusted with the party machinery, had misused RM30mil that was meant for logistics to bring Kelantanese voters who were working or living in the Klang Valley to return to Kelantan to cast their votes.

As Ahmad Zahid was about to mention the third MP, Deputy Public Prosecutor Datuk Raja Rozela Raja Toran stood up to object on grounds of hearsay.

She said that the accused should not link the corruption of YAB to any individual unless they would be called to testify.

“It is hearsay and inadmissible unless they are called as witnesses,” Raja Rozela said. Ahmad Zahid’s lawyer Hisyam Teh Poh Teik told Justice Collin Lawrence Sequerah that the courtroom was the right place for his client to speak the truth and defend himself.

“He is facing serious charges and must be given the latitude to expand on his defence,” he said.

Justice Sequerah then said that while he understood the issue on hearsay raised by the prosecution, he would decide on the admissibility of the evidence later.

Ahmad Zahid then said the third individual was the Bagan Serai MP, whose younger brother, a special officer, managed the constituency development funds and had abused the funds.

He added the MP was about to be charged due to the sibling’s act and that he had proof of it.

She then joined Bersatu and was later made deputy minister in the Prime Minister’s Department last year.

Jeli MP Datuk Seri Mustapa Mohamed left Umno in September 2018 and joined Bersatu. He is now Minister in the Prime Minister’s Department in charge of economy.

The court also heard how Tun Dr Mahathir Mohamad purportedly told Ahmad Zahid to dissolve Umno in 2018 in a meeting after GE14 because the party had no future.

In the meeting in June 2018, Ahmad Zahid said he was asked to defect, leave Umno and join Bersatu.

He dismissed the request.

“I told Dr Mahathir, if I join Bersatu and die the next day, my grave would flood because 3.8 million Umno members would come and urinate on my grave,” he added.

To a question by his lawyer Datuk Ahmad Zaidi Zainal, Ahmad Zahid said he was threatened that “something would happen” to him if he refused Dr Mahathir’s request to dissolve Umno. 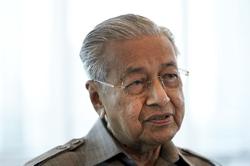