KUALA LUMPUR: The Court of Appeal has fixed Aug 29 for another case management on clerk Sam Ke Ting's appeal against her conviction and jail sentence for reckless driving which caused the death of eight teenagers on modified bicycles commonly known as basikal lajak.

When contacted, Sam’s counsel Harvinderjit Singh said the deputy registrar set Aug 29 for further case management as the record of appeal is not yet ready.

"On the next case management, we will update on that matter (record of appeal),” he said.

On April 18, this year, the Court of Appeal granted leave to Sam to appeal against her six-year jail sentence and RM6,000 fine imposed by Johor Baru High Court.

The Court of Appeal had also allowed Sam’s application to stay the execution of the jail sentence and fine imposed by the Johor Baru High Court and also released her on bail of RM10,000 in one surety, pending the hearing of her appeal.

Five days earlier, on April 13, High Court judge Justice Abu Bakar Katar meted out the jail sentence and fine against Sam after allowing the prosecution's appeal to set aside the Magistrate's Court's decision on Oct 10 last year, which acquitted and discharged the woman.

He also ordered the woman to be jailed for six months if she failed to pay the fine and a three-year driving ban upon completion of her prison term.

Sam, who was 22 years old at the time of the incident, was charged with committing the offence at Jalan Lingkaran Dalam, Johor Baru, Johor, at 3.20am on Feb 18, 2017. 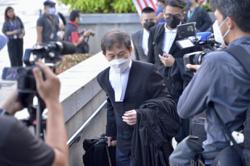