SEREMBAN: A 35-year-old businesswoman from Port Dickson lost almost RM585,000 after being cheated in a phone-cum-online investment scam.

State Commercial Crime Investigation Department chief Supt Aibee Ab Ghani said the woman first received a message on WhatsApp from an unidentified man on Feb 14 who introduced her to an online investment scheme.

"The suspect told her that the returns were high and that she should invest some money in it.

"The victim then decided to check out the application known as RRR68.club and eventually agreed to invest a small sum," he said in a statement.

She then banked money into several accounts and within a short period of time managed to earn a RM4,000 profit.

However, she was not allowed to withdraw her profits yet and was convinced into investing more.

The woman fell for the trap and made more than 50 transactions to transfer cash into 13 accounts belonging to individuals and companies.

Supt Aibee said the victim continued doing so till April 24.

"However, when she tried to access the application on May 25, she could not do so.

"Only then she realised that she had been duped," he said, adding that she lodged a report on June 16.

He said that the case was being probed under Section 420 of the Penal Code for cheating.

The offence carries a jail term of between one and 10 years, whipping and a fine upon conviction. 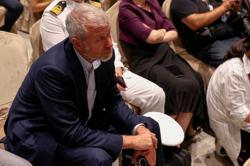