US rate hike effect factored in by markets, says Zafrul

“The US Federal Reserve decision to increase its interest rates by 75 basis points has been discussed and expected in the market.

“So, it has been factored in because of the rising inflation in the United States. It’s something that we have discounted and factored into the markets.

“All markets expected it. So, there will be no impact to Malaysia in the medium term,” he said when met at the sidelines of the launch of phase one of the MRT Putrajaya Line by Prime Minister Datuk Seri Ismail Sabri Yaakob at the Sri Damansara MRT station on Thursday (June 16) afternoon.

Zafrul said inflation in Malaysia was still within the 2.3% to 3.3% forecast, adding that the revised US forecast still hasn’t indicated a recession, but a moderation in GDP growth.

However, Malaysia, being a small and open economy, was subjected to the growth of developed countries such as the US, Europe and China, said Zafrul.

“So, we have to continue monitoring the growth of the economies which will have an impact on global growth and of course, Malaysia’s growth is dependent on the strength of the global economy,” added Zafrul.

“But, things are very fluid, so we have to continuously monitor the progress, ensure that both appropriate monetary and fiscal responses are done to ensure our economy is growing despite the challenges.

On Thursday (June 16), the US Federal Reserve raised its benchmark interest rate by 75 basis points, the highest in the country since 1994. 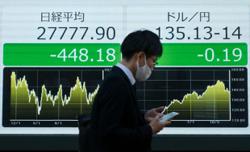