ALOR SETAR: The Malaysian Maritime Enforcement Agency (MMEA) thwarted an attempt by four local men to smuggle in 119 Rohingya migrants into the country by hiding them in the hold of a fishing boat in Sungai Kedah last Tuesday (May 24).

Kedah police chief CP Wan Hassan Wan Ahmad said a MMEA team on patrol in the area intercepted the boat at about 9.20pm and following inspection, found the migrants in the fish compartment.

He said four local men, aged between 32 and 39 who included two civil servants, were also arrested for investigation under Section 26A of the Anti-Trafficking in Persons and Anti-Smuggling of Migrants Act 2017. - Bernama 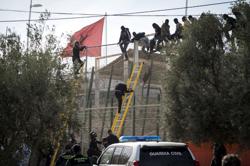