KUALA LUMPUR: A lawsuit filed by lawyer Mohamed Haniff Khatri Abdulla against Parti Pribumi Bersatu Malaysia and three others over alleged non-payment of RM12.5mil in legal fees will be heard in a full trial in 2024 after the High Court here dismissed his application for a summary judgment.

High Court judge Justice Akhtar Tahir made the dismissal during online proceedings here on Tuesday (May 24).

This means the merits of the case will only be heard during the trial.

The court also ordered for costs of RM3,000 to be paid to Bersatu.

Lawyer Chetan Jethwani, who represented Bersatu, said the court dates have been fixed for March 2024.

Mohamed Haniff told The Star that he would be filing an appeal against the dismissal soon.

In the online proceedings, Mohamed Haniff appeared for himself with lawyer Nurul Huda Razali while Chetan appeared for Bersatu.

In his statement of claim, Mohamed Haniff claimed that he had helped the party in legal matters since its inception in 2016 under the leadership of Dr Mahathir.

The lawyer claimed he provided legal advice, helped draft Bersatu's constitution and letters of correspondence, assisted in the set-up of the party's pro-tem committee members and attended to a challenge to its registration by the Registrar of Societies (ROS).

He further said that from time to time his services were required by the party for legal advice, including by the party's wings and also the president and chairman.

He claimed that his appointment to advise the party on legal matters required him to be present in the party meetings, its headquarters and that he was also responsible in drafting cause papers when the party had problems with the ROS in 2018.

Mohamed Haniff said he sent an invoice on Jan 11, 2021 to Bersatu for the legal services he had rendered from 2016 to Feb 23, 2020, and there was an acknowledgement of receipt by the party.

However, despite sending subsequent reminders dated Feb 16, 2021 and March 5, 2021, he claimed that there has been no response from Bersatu.

"Hence, I am seeking a court order for the party and its office bearers to pay the RM12.5mil plus interests and cost of the action," he said.

In January, Mohamed Haniff filed the application for a summary judgement.

A summary judgment is when a court makes a decision without going to a full trial. 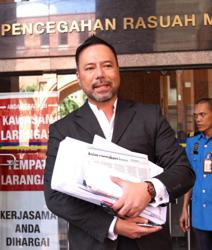