BUTTERWORTH: The heroic act of an off-duty fireman helped save the life of a woman who wanted to throw herself off of Penang Bridge on Saturday (May 21).

State Fire and Rescue Department spokesperson said the department received a call from the public informing them about the incident that occurred at KM3.4 island bound at about 3.35pm.

"A team of firemen arrived at the scene and saw the victim already being rescued by an off-duty fireman who happened to be at the scene during the incident," he said in a statement on Saturday (May 21).

The spokesperson said the 43-year-old victim then was handed over to police for further action.

The operation ended at about 4.25pm.

In a video clip that has been viral in social media, the woman can be seen standing at the ledge of the bridge with some passers-by trying to persuade her not to jump.

Suddenly, out of nowhere, a man with his motorcycle helmet still on grabbed the woman from behind.

Other passers-by also came to help by assisting the man to block the woman from attempting to jump again. 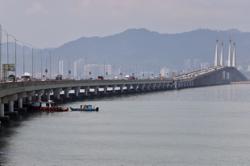 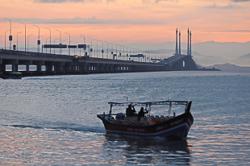