Sri Ram said the application was made under Section 63 of the Malaysian Anti-Corruption Commission (MACC) Act 2009.

The section stated in a situation where two or more people are charged with an offence under this same law, the court may require one or more of them to give evidence as witnesses for the prosecution if the public prosecutor makes a written application.

“The accused (Arul Kanda) has information about transactions with the other accused (Najib), which will materially affect the outcome of the prosecution of that accused (Najib),” Sri Ram said here yesterday.

The prosecutor said the information is about a meeting held on Feb 24, 2016, preceding it and events that followed after.

The court had previously heard testimonies that a coordination meeting between 1MDB and several related government agencies was called on Feb 24, 2016, to discuss amendments to the audit report at the behest of Najib.

At the end of the meeting, it was agreed that four issues would be removed from the audit report, including two conflicting financial statements and fugitive financier Low Taek Jho’s presence at a 1MDB meeting despite him having no official position in the company.

Najib’s lead counsel Tan Sri Muhammad Shafee Abdullah, who objected to the application, told the court the prosecution’s application was “unusual” and “probably the first” of its kind in modern times.

“I immediately see issues, including constitutional issues,” he said.

Muhammad Shafee also said that the prosecution must meet the requirements of the law if they were to make the application under Section 63.

Datuk N. Sivananthan, who represented Arul Kanda, told the court that the prosecution had indicated in its opening statement at the beginning of the trial its intention to call his client to testify.

“My client’s position has been consistent since the investigation. This is the prerogative of the prosecution to do so (in making the application),” he added.

Sivananthan said he would not be submitting the application and left the matter to the court’s discretion.

Justice Mohamed Zaini said it would only be right for the court to hear the basis of the application first before he could make a ruling on the matter.

He then asked the parties to submit their written submissions and fixed May 30 to hear the application.

“We will be addressing the court on this part of the case at the appropriate stage,” he said. 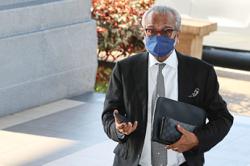