All positions in Upko can be contested, says Madius Tangau

Madius did not explicitly address Benedick’s intentions but only said that all positions could be contested come the party polls, which are expected in October this year.

This comes a day after Benedick expressed his preparedness to take on a higher position in the party.

“Every position, starting from the branch committee members up to the permanent chairman are up for open contest in the spirit of democratic process and the party’s struggle for the people,” Madius said.

“As with all political parties, there are bound to be members who would like to take the opportunity to contribute to the party’s progress by shouldering bigger responsibilities.

“We welcome such spirit and commitment from our members in Upko,” the Tuaran MP said in a statement on Tuesday (May 17).

Speaking during the Kota Belud Upko division triennial general meeting at Dewan Kadamaian Square on May 16, Benedick had stated that he was ready to shoulder the responsibilities of being the party’s top leader if members desired him to do so.

“I am not challenging anyone’s leadership but I intend to offer my leadership record and service in Kadamaian (where he is the assemblyman) to the party members.

“If they think my track record can become the new inspiration for the party and they feel the time has come, I am willing to take on that challenge,” he said.

It was also previously reported that Madius was said to have been offered a “president mentor” position by senior party leaders and subsequently make way for Benedick to take over the reins.

In his statement on Tuesday, Madius, a former federal minister, added that Upko understood fully well the challenges the party was facing.

He said being a member of the opposition bloc would trigger various ideas and suggestions on how Upko should position itself in order to steer the party’s struggle and serve the people better.

“More so when the general election is approaching.

“But what is equally important is that I am confident and comfortable to know that the new leadership following the party’s triennial general meeting this year will be based on ensuring unity, strength and honesty in Upko’s fight are always preserved,” Madius said. 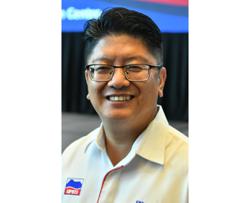