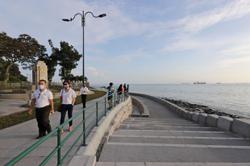 GEORGE TOWN: The RM12.9mil Esplanade upgrade, which took six years to complete, is set to wow locals and foreigners alike with its sweeping vista of the Penang seafront.

Stretching 460m from the Medan Renong food court to the Royal Malaysian Naval Base, wider walkways now welcome more visitors while its terraced seawall near the Cenotaph Memorial allows people to get closer to the sea overlooking the northern coast.

Two stairways allow direct access to the large boulders of the sloping revetment that are exposed during low tide.

Project architect Teng Pe Yang said various factors were taken into consideration, with the design and construction materials meant to complement the significance of George Town as a World Unesco Heritage Site.

“Most of the granite used for the revetment was quarried locally, including from Melaka.

“However, the granite for the gravity wall stretch was sourced from China, while the handrail fittings, made of cast iron, are from the United Kingdom.

“The handrail fittings are based on the Kee Klamp handrail system developed in the 1930s in England.

“They retain design traces of the historical cast iron handrail fittings that were prevalent here at the Esplanade and throughout George Town during the colonial period,” he said during the project’s official opening yesterday.

Teng said other features in the design, such as incorporating a trench which would take in water from outside the seawall during high tide, allows for a taller and larger extent of the original seawall to be seen and appreciated.

To commemorate some historical elements of the original Esplanade, Teng, who is a landscape architect, said eight “memory tiles” containing excerpts of letters and reports written by colonial officers about 200 years ago, including Sir Stamford Raffles, would be placed in holes on the curbs.

They can be found at the terraced section dubbed the Esplanade Sea Wall Heritage Trail.

He said the project was supported by the George Town Conservation and Development Corporation, a partnership between Penang and Think City.

“It is one of 14 projects under the RM140mil North Seafront Masterplan that starts from Dewan Sri Pinang to Fort Cornwallis and the entrance to Swettenham Pier.

“So far, 10 of the projects have been completed,” he said.

During the years of construction on this project, a total of five cannons and short range mortars dating back to the late 18th and early 19th centuries were discovered.

Chow said while the initial plan was to restore the cannons and place them in Fort Cornwallis nearby, there were proposals to place one of them at the Esplanade.

Fort Cornwallis, a bastion fort located in the heart of the city and built by the British East India Company in the late 18th century, is Malaysia’s largest standing fort.

Penang Island City Council mayor Datuk Yew Tung Seang said the new seawall at Esplanade funded by the council was not just an upgrade, but also protection against the open sea.

“The project will help establish protective measures and the monitoring of possible damage to the historical buildings in the vicinity such as the Royal Malaysian Navy building, City Hall and the Cenotaph.

“It features a network of subterranean drainage systems that will help channel water from inland out to sea,” he said.

Construction of a linear garden next to the Esplanade costing RM1.4mil is set to start in July. 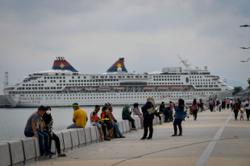