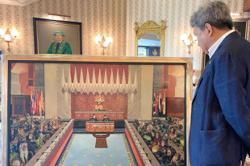 PETALING JAYA: An Umno Supreme Council member has voiced interest in purchasing the painting which depicted MPs in Dewan Rakyat as apes and frogs.

In a Facebook post on April 14, Datuk Dr Mohd Puad Zarkashi (pic below) said he would buy the painting, currently owned by the Sultan of Selangor, Sultan Sharafuddin Idris Shah, if the Ruler decided to auction it off.

“I am willing to buy the painting if the Sultan decides to auction it.

“If I can own it, it will not be resold but instead gifted to Muzium Negara for public viewing,” said the Rengit assemblyman. Previously, the painting caught the eye of netizens following the Ruler’s decision to buy a satirical artwork set in the Malaysian Parliament with a roomful of primates and frogs as its members.

The painting also showed both the primates and frogs appearing to create a ruckus.

According to a post by the Selangor Royal Office on Instagram, Sultan Sharafuddin intended to hang the artwork in his private study room and hoped to auction off the painting and channel the proceeds towards charity. 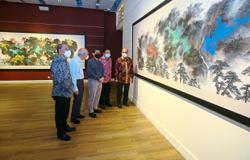