SHAH ALAM: Selangor Ruler Sultan Sharafuddin Idris Shah expressed his sadness and is very concerned over reports of some private medical practitioners involved in the selling of fake digital Covid-19 vaccination certificates to the public.

Istana Alam Shah, in a post uploaded to the Selangor Royal Office official Facebook page Saturday (Jan 29), said that Sultan Sharafuddin was also shocked at the modus operandi used by a doctor, who is also the owner of a clinic in Gombak, and six clinic assistants who were arrested by the Selangor police recently.

According to the Sultan, based on preliminary investigations, they were alleged to have issued legitimate digital vaccination certificates to 5,601 people who were against the vaccination without actually giving them the vaccine jab.

Instead, the vaccines provided by the Health Ministry were thrown away and the empty bottles returned (to the ministry) to justify the issuance of the vaccination certificates.

What saddened the Ruler more was that some of the medical practitioners involved were Malays and Muslims, who were willing to do heinous and sinful things to get rich quickly.

"His Highness is very disappointed with this latest development as it could affect efforts by the government and the Health Ministry to stop the spread of Covid-19 in Malaysia.

"His Highness has asked the authorities in Selangor to investigate, arrest and take stern action against those found to be abusing their power as medical practitioners. If found guilty, they should be given the heaviest punishment," the post read.

The Sultan of Selangor said efforts by the relevant authorities to curb the spread of Covid-19 would be futile if such activities were to continue.

"The people in the country will no longer be able to face a health crisis as a result of the spread of diseases such as Covid-19, which has crippled the economy and affected their daily life.

"His Highness hopes no one would take advantage of a situation for personal gain without caring about the adverse effects on the society, especially on matters concerning public health,” it said. - Bernama 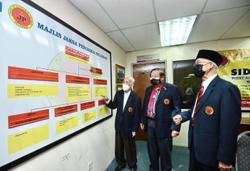