According to a post on Istana Negara’s official Facebook page Saturday (Jan 29), Their Majesties were saddened by the death and hoped that his family would be patient and strong in coping with the loss.

"Their Majesties pray for his soul to be blessed by Allah SWT and placed among the righteous.

"Al-Sultan Abdullah and Tunku Azizah greatly appreciate and praise the former governor’s devotion, service and sacrifice to the state and country " read the post.

Tun Salahuddin, who was 100 years old, passed away of old age at the Normah Medical Centre at 11.47 pm Friday. 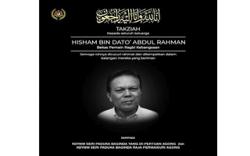