The former Johor state investment, cooperatives, entrepreneurship development and human resources committee chairman made the announcement adding that the decision was made after losing faith in the leadership of Bersatu president Tan Sri Muhyiddin Yassin.

“He (Muhyiddin) had failed to bring any development to the party after former Bersatu chairman Tun Dr Mahathir Mohamad left,” he said during a press conference at DoubleTree Hotel, here on Saturday (Jan 29).

He added that he had also decided to join Umno and help Barisan Nasional in the coming state election.

He was the second Bersatu leaders who decided to quit after Tebrau Bersatu chief and former state education, information, heritage and culture committee chairman Mazlan Bujang did last Thursday (Jan 27).

Earlier, on Jan 26, The Star reported that several Parti Pribumi Bersatu Malaysia leaders are expected to quit the party over the coming days before the state election.

Several Parti Pribumi Bersatu Malaysia leaders are expected to quit the party over the coming days.

However, it was not clear if they would join any other political party or contest independently.

One of those touted to announce his decision to quit apparently previously holds an important post in Johor Bersatu.

Umno sources said at present, they had received indications that two Bersatu assemblymen, who previously had hopped out of Umno after GE14, had expressed interest in returning to the party. 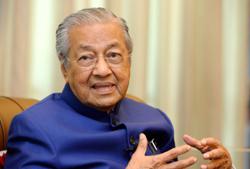