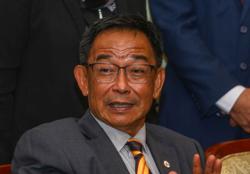 The Chief Minister said Abang Salahuddin was one of Sarawak's leaders who had been interviewed by the Cobbold Commission prior to the formation of Malaysia and helped to bring Sarawak into the era of independence.

"He was appointed Sarawak Governor twice, which reflects his leadership and stature in uniting Sarawakians.

"I had the privilege of serving as a minister during his tenure and he gave us a lot of advice on upholding Sarawak's peace and prosperity," Abang Johari told reporters after paying his last respects to Abang Salahuddin at Masjid Jamek here on Saturday (Jan 29).

He also conveyed the state government's condolences to the late former Governor's family.

His casket arrived at Masjid Jamek at about 11.20am on Saturday, accompanied by family members.

Abang Salahuddin will be laid to rest at the Samariang Muslim cemetery later Saturday.