Bill to limit PM’s term to be tabled in Parliament 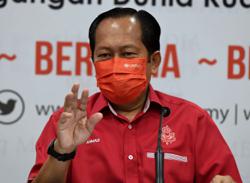 PUTRAJAYA: A Bill to limit the tenure of the prime minister to 10 years is expected to be tabled in the next Parliament meeting which starts on Feb 28, says Datuk Seri Dr Wan Junaidi Tuanku Jaafar.

The Minister in the Prime Minister’s Department (Parliament and Law) said a study on this as well as one on anti-hopping laws were presented during an engagement session with leaders of all political parties on Dec 22 last year.

“The early draft of the amendments to the Federal Constitution is currently being reviewed by political parties,” he said during a session with staff of the Legal Affairs Division yesterday.

Last year, Wan Junaidi told Parliament that Putrajaya would launch two surveys to obtain public feedback before it introduced legislation to limit a prime minister’s term to 10 years and to prevent elected representatives from defecting.

Recently, the minister also said that anti-hopping laws were expected to be tabled next month.

On the drop in Malaysia’s ranking in the Corruption Perceptions Index (CPI) 2021, Wan Junaidi expressed confidence that the country’s standing would improve with action taken against those who have committed such offences.

He said action by the authorities such as the Malaysian Anti-Corruption Commission and the police had given a positive perception on the country’s fight against corruption.

“I am confident that our ranking on the CPI will improve as action by the authorities will leave a positive impression when corruption is being dealt with,” he said.

The index, Wan Junaidi added, is based on exposure and awareness that corruption is happening in a country.

“If there is corruption in a country but cases and issues are not raised, then the perception is that such incidents do not or rarely happen there.

“Perception can also be positive when there are actions by the authorities to tackle corruption,” he added.