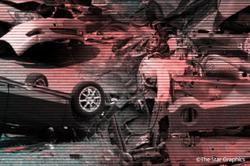 TAMPIN: The body of a man with his hands and feet bound was discovered in a house in Jalan Cenaga Baru, Kampung Repah, here, on Thursday (Jan 27).

Tampin police chief Supt Anuwal Ab Wahab said police received a call on the discovery of the 26-year-old’s body at 3.02pm, on a mattress in with his hands and feet tied.

"At about 2.30pm, the victim’s wife with her mother and four-year-old son went to the house after the victim could not be contacted two days ago.

"The last time the victim's wife sent a message via WhatsApp was at 3.36am today without a reply.

"The victim's wife who had been in her hometown in Pulau Gadong after giving birth on Saturday (Jan 22) then asked for help from a neighbour to call the fire department because she saw the victim through the room window with her husband's hands and feet tied and wrapped," he said in a statement here on Thursday.

Anuwal said the victim was believed to have died more than 24 hours prior and the body was taken to the Forensic Unit of Tuanku Ja'afar Hospital, Seremban for post-mortem.

He said the case was being investigated for murder and further investigations are ongoing. - Bernama