KUALA LUMPUR: The fire that broke out at the Malaysian Embassy in Seoul, South Korea, on Friday (Jan 28) caused only minor damage to one of the rooms on the second floor of the building.

The embassy’s charge d’affaires Ahmad Fahmi Ahmad Sarkawi, when contacted by Bernama from here, said that consular services would resume as usual on Monday (Jan 31) as the fire did not involve the division.

“Only part of the wall in the room along with the curtains were burnt and part of the furniture was damaged. This weekend, we will be allowed to re-enter the embassy to carry out cleaning work.

“It’s just that today the embassy is closed because the fire brigade gave the advice not to enter the building for fear of smoke or poisonous gas; so we opened all the windows to ventilate the building,” he said.

Recounting the incident that happened at 9.30am, Ahmad Fahmi said the fire started due to a short circuit from one of the central heating units.

The fire was first noticed by an embassy official who had just started work in the next room when his electrical equipment suddenly shut down and he smelled smoke.

“When he looked in the next room, he saw that the fire from the air heater had started to spread to the curtains. The heating unit is located at the bottom of the wall,” he said, adding that at that time there were almost 20 people in the embassy building.

Ahmad Fahmi said at first they tried to put out the fire with extinguishers but were unsuccessful.

“Electrical fires are quite difficult to put out and when the smoke is too thick which makes breathing difficult, we all go out (of the building),” he said.

The fire brigade arrived about five minutes later and the fire was successfully extinguished within 17 minutes, he said, adding that no one was injured in the incident. – Bernama 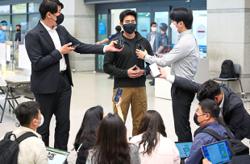