PETALING JAYA: A man died while his wife and two children were seriously hurt in an accident at KM38.3 of the Ipoh-Teluk Intan road near Kampung Kerinchi in Perak on Tuesday (Jan 25) evening.

Sinar Harian reported that the incident which occurred around 6.50pm saw 31-year-old Mohamed Shafrie Yahaya succumbing to his injuries on the spot.

The incident is believed to have occurred when the car they were riding suddenly crashed into the drain, which caused them to be thrown out from the car.

Kampar OCPD Superintendent Mohamad Nazri Daud said the mother and two children were brought to the Kampar hospital for treatment.

“The deceased was also brought to the same hospital for a post mortem. Investigations into the actual cause of the accident are ongoing,” he said.

Meanwhile, a spokesperson from the Perak Fire and Rescue Department said members of the Kampar fire station were dispatched to the location after being informed at 6.57pm.

“There were no victims stuck while the two children were sent to the hospital by passers-by before the arrival of our officers, " said the spokesperson.

“The body of the deceased was also handed over to the police for further action while the wife was given early treatment at the location before being sent to the hospital by ambulance,” they added. 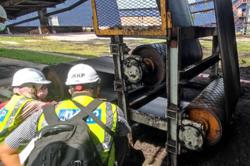