SERDANG: Police have seized contraband beer and liquor worth RM32,000 with unpaid duties worth an estimated RM145,000 after raiding a factory at Taman Perindustrian Puchong here.

Serdang OCPD Asst Comm A.A Anbalagan said police raided the premises on Jalan TPP, 1/19 there at around 5pm on Jan 22.

"We arrested a 29-year-old Bangladesh national who worked there.

"Further checks led to the seizure of a mobile phone, a lorry and 11,376 cans of beer and 600 bottles of liquor," he told reporters at the Serdang police headquarters on Wednesday (Jan 26).

He said police were now investigating the source of the contraband beer.

"It is learnt that some of the boxes of beers came from a neighbouring country, so we are trying to verify this.

"We believe a syndicate was using the factory as a storage facility to store the illicit items," he said, adding that the syndicate is believed to be active for at least five or six months.

ACP Anbalagan said the case was being investigated under Section 135(1)(D) of the Customs Act for possessing or selling contraband items and Section 6(1)(C) of the Immigration Act for not having a valid pass or permit to stay in Malaysia.

He said police would continue with their operations on such syndicates.

Those with information on such activities can contact the police hotline at 03-2052 9999 or go to the nearest police station. 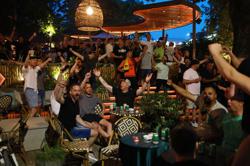